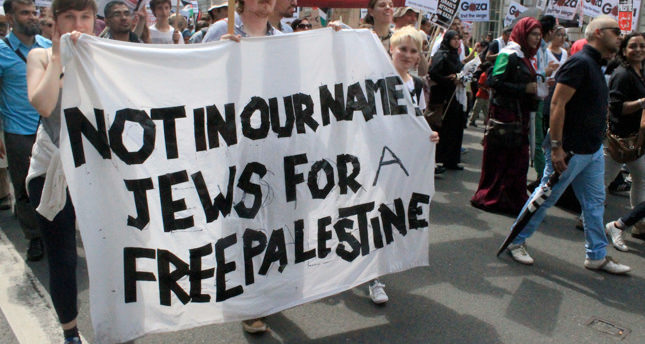 by daily sabah Aug 24, 2014 12:00 am
International Jewish Anti-Zionist Network(IJSN) has published a letter on Saturday condemning Israel's massacre on Gaza and calling for an end to genocide of the Palestinian people.

It has been stated in the letter, which was signed by 327 Jewish survivors and descendents of survivors of Nazi genocide, that nothing can justify Israel for bombing UN shelters, homes, hospitals or depriving people of electricity and water.The letter also called international community for a full economic, cultural and academic boycott of Israel.

"As Jewish survivors and descendents of survivors of the Nazi genocide, we unequivocally condemn the massacre of Palestinians in Gaza and the ongoing occupation and colonization of historic Palestine. We further condemn the United States for providing Israel with the funding to carry out the attack, and Western states more generally for using their diplomatic muscle to protect Israel from condemnation. Genocide begins with the silence of the world. Never again must mean never again for anyone." said in the letter.