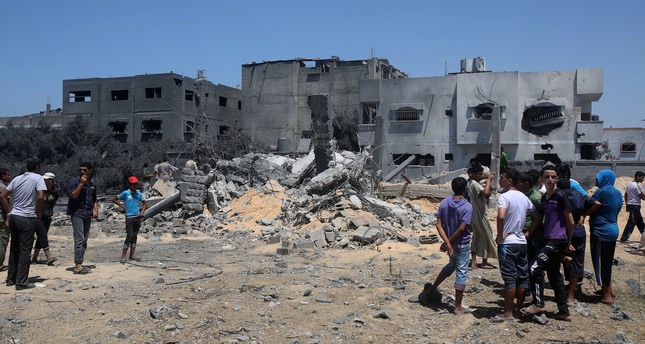 by AA Aug 24, 2014 12:00 am
A Turkish aid official in the blockaded Gaza Strip has joined a trending campaign, but instead of pouring cold water over himself, he has used dust in solidarity with the children of Gaza.
"This is an alternative to the 'ice bucket challenge' because the children of Gaza get buried under the rubble of their bombed-out homes," said Mehmet Kaya, a representative of Turkey's Humanitarian Relief Foundation (IHH) in Gaza.
"This is Gaza, the heart of Palestine, where children and women are killed by tons of bombs falling on their heads," he went on to say.
At least 2,109 Palestinians, mostly civilians, have been killed and more than 10,000 others injured in Israeli attacks since July 7, according to the Palestinian Health Ministry.
The Israeli onslaught has also left a trail of massive destruction in the besieged coastal enclave, home to some 1.8 million people.
Kaya said he was sending a message to the leaders and scholars of the Muslim world.
"You should take a bucket of dust and pour it over your heads to feel the injustice perpetrated against the people of Gaza," he added.
Several celebrities around the world have taken the ice bucket challenge and posted their videos on the Internet to help raise money for and awareness about amyotrophic lateral sclerosis (ALS), a neurodegenerative disease.