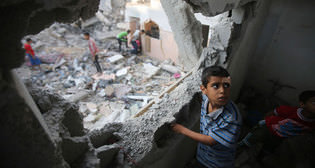 Over the past few days, the Israeli military deliberately targeted civilian homes while journalists in the field report that U.S. made weapons were used in the latest attacks

Israeli airstrikes on Gaza continued over the weekend. While the death toll passed 2,100, the Israeli army started deliberately targeting civilian homes. On Sunday, Israeli Prime Minister Benjamin Netanyahu told the Palestinians to immediately leave any site where militants are operating, one day after Israel took the Gaza war to a new level by flattening a 13-storey apartment tower. Yet, Netanyahu ignored the fact that there is no place for Gazans to go.

Israel attacks Gaza, but the U.S., who played a mediating role between the Palestinian and Israeli sides, is one of the primary weapon suppliers to Israel. In Israel's short history, the U.S. has been providing aid and been one of the main countries that has significantly strengthened the Israeli militarily.

The U.S. is one the strongest allies of Israel in the world, and during and after every military operation on Palestine and Gaza, the U.S. underscores that Israel has the right to self-defense. The U.S.' support is not only rhetorical, but also embodied with the military aid that started in 1962. Since then, the U.S. has given more than $100 billion to Israel. In recent decades, the U.S. has been giving approximately $3 billion every year. In recent years, the aid was only for purposes of defense. In addition, the U.S. was giving Israel generous military aid for projects that are important both for the U.S. and for Israel. In a deeply troubled region, the U.S. feeds the Israeli military.

Relations between Israel and the U.S. are at a peak, but their start was chaotic. On Nov. 29, 1947, the U.S. supported U.N. Resolution 181 to recognize Israel, but in March 1948, it leaned toward the adoption of a resolution of the General Assembly to set aside 181 because of the state of Israel on the battlefield and the pressure of hostile Britain and the Arab world.

During the first decades of the state, American economic aid to Israel was modest and limited to civilian aid. Under a special agreement with Israel, the U.S. maintains emergency caches of munitions including rockets, artillery, and armored combat vehicles, and 1 billion shells. The European Command of the U.S. Army manages the project. In the Second Lebanon War and Operation Protective Edge, the U.S. sold Israel the weapons in these caches.

The U.S. civilian aid to Israel started in 1949, immediately after the state was created. In the 1950s, the U.S. continued to give Israel civilian aid for economic purposes and to strengthen the recently established state.

The change began during the administration of Lyndon Johnson (1963-1969), when the U.S. began transferring the largest civilian aid to Israel, which has increased over the years. Between the creation of the state and in 1962, the U.S. under Presidents Harry Truman and Dwight Eisenhower imposed a comprehensive arms embargo on Israel. The first president to lift the embargo was John Kennedy, who in 1962 allowed Israel to pay in full for Hawk surface-to-air missiles. In 1965, America began selling offensive weapons to Israel for the first time. In the 1960s, France was the main supplier of weapons to Israel, until the recovery after the Six Day War, when the U.S. became the main supplier.

In 1984, the Cranston Amendment stopped lending to Israel while increasing subsidies to stop old debts. In 1985, under the terms of stabilizing the economy, American aid was set at a subsidy of $3 billion per year. In this year, Israel also received another $1.5 billion. A negotiator between the countries in 1985 was Professor Stanley Fischer, who later became the governor of the Bank of Israel.

The largest amount of American aid in grants and loans in one year came to $15.7 billion in 1979, when Israel signed the peace treaty with Egypt. In total, American aid to Israel between 1950 and 2013 was approximately 3 percent of Gross Domestic Product (GDP) of Israel during this period.
For the past 20 years, the U.S.-Israeli military agreement, allows the U.S. administrations to give weapons and other safety equipment that Israel needs to advance its military power. One of the most expensive weapons deals in the history of the Israeli Defense Forces - the purchase of 20 F-35 fighter jets for 2.7 billion - will be fullyfunded by aid money. The agreement was signed at the end of 2010, and the first planes are scheduled for delivery to Israel next year.

The U.S. also contributed to Israel over the years with military projects and common defense essential for both parties. For example, the U.S. helped Israel to develop its defense system that includes the multilayer Iron Dome, Magic Wand and Arrow systems. The cost so far has been about $3 billion, with more than $1.3 billion alone for Iron Dome.

In May 2010, President Barack Obama requested and received a special allocation of $205 million for the Iron Dome project beyond the regular American military aid. Subsequent requests for funding for the project were also approved, including $351 million that Israel has asked for to purchase additional Tamir interceptor missiles for Iron Dome in the third week of July, during Operation Protective Edge. A week later, both houses of Congress approved with the support of President Obama, an additional special assistance program for Israel including $225 million for the purchase of more Tamir missiles.
RELATED TOPICS