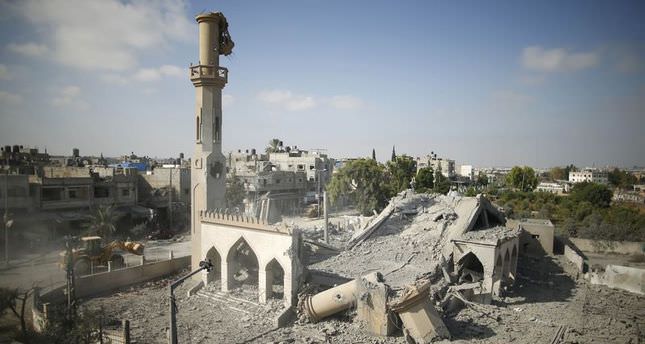 by AA Aug 25, 2014 12:00 am
Palestinian factions in the Gaza Strip have agreed to an Egyptian proposal for a month-long ceasefire with Israel that would hopefully serve as prelude to a long-term truce, a Palestinian source familiar with the issue said Monday.

"Egypt proposed a one-month ceasefire, with the option to extend it, between the Palestinians and Israel," the source, who preferred anonymity, told Anadolu Agency.

The Palestinian negotiating team at indirect, Egypt-mediated talks has agreed to the proposal, the source added, "without any reservations on the part of any of the Palestinian factions."

The source added that Egyptian mediators were currently awaiting Israeli approval of the proposal, after which they plan to formally announce it on Monday evening.

It would then go into effect on Tuesday morning, according to the source.

Israeli media, meanwhile, confirmed that the Israeli government had received an Egyptian proposal for a ceasefire but had yet to respond to it.

"If the proposal is approved, it would be in return for opening the Rafah border crossing [between Egypt and Gaza] to Palestinians and the expansion of the fishing area [to Gaza fisherman]," Israel's Walla news website quoted an Israeli security official as saying.

However, the official added, "The Israeli leadership has yet to approve the Egyptian proposal."

While Israel accused Hamas of breaking a temporary ceasefire with a rocket barrage, the Palestinian faction accused the self-proclaimed Jewish state of attempting to derail the truce talks in Cairo.

At least 2123 Palestinians have been killed and more than 10,800 others injured in relentless Israeli attacks on the Gaza Strip since hostilities began on July 7.

The Palestinian death toll from Israel's offensive has surpassed the combined total fatalities of two past major Israeli operations against Gaza, including 2008/09's "Operation Cast Lead" in which at least 1500 Palestinians were killed over three weeks.