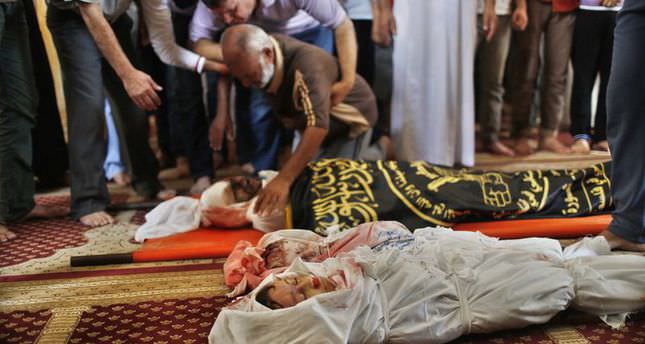 by Anadolu Agency Aug 26, 2014 12:00 am
Two Palestinians were killed Tuesday in a fresh Israeli airstrike in eastern Gaza City.

The latest fatalities bring to 2137 the total number of Palestinians, mostly civilians, killed in Israeli attacks across the Gaza Strip since hostilities began on July 7.

Meanwhile, Hamas said that a long-term truce to end seven weeks of fighting in Gaza had been agreed with Israel, hailing it as a "victory for the resistance."

"The negotiations with an agreement which embodies the resistance of our people and a victory for the resistance," Hamas's exiled deputy leader, Mussa Abu Marzuk, wrote on his Facebook page

For the last seven weeks, Israel has pounded the Gaza Strip from air, land and sea with the stated aim of halting rocket fire from the Palestinian territory.

Thousands of homes across the beleaguered coastal enclave, meanwhile, have been partially or completely destroyed by devastating Israeli bombardments.

The number of Palestinian fatalities from Israel's current offensive has now surpassed the combined death toll from two previous operations against Gaza, including Israel's bloody "Operation Cast Lead" in 2008/09 in which at least 1500 Palestinians were killed over a three-week period.
Last Update: Aug 26, 2014 5:35 pm
RELATED TOPICS