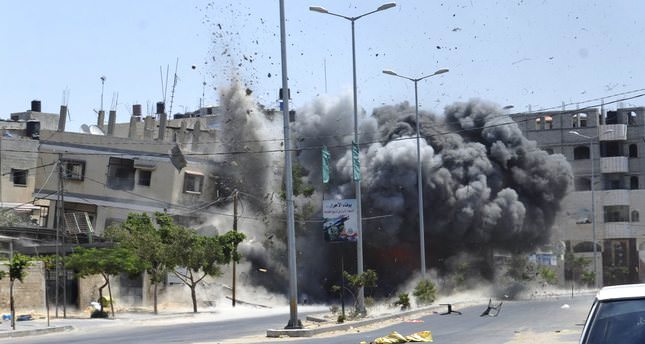 by Daily Sabah Aug 26, 2014 12:00 am
According to Anadolu Agency, Hamas has accepted a month-long, Egypt-proposed cease-fire while Israel continues to shell Gaza. However, Israel-based daily Haaretz newspaper reported that no cease-fire agreement was reached but Israel plans to expand its airstrikes on the Gaza Strip.

Israeli Prime Minister Benjamin Netanyahu earlier warned Gaza inhabitants to vacate the sites that Israel will hit and on Sunday a 13-storey apartment building was flattened and a Hamas financial official Mohammed al-Ghul was killed in his car by Israel airstrikes. On Sunday, Israeli attacks left 17 dead. Early Monday, the airstrikes killed a one-year-old girl and a 17-yearold boy, Gaza health ministry spokesman Ashraf al-Qudra said. Also, Israeli aircraft bombed the Omar bin Abdel-Aziz mosque in the northern Gaza Strip town of Beit Hanoun and the Ali bin Abi Taleb Mosque in the Zeitoun neighborhood in the south, according to witnesses who reported to Anadolu Agency.

For a permanent cease-fire, Hamas is demanding that Israel lift its years-long siege of the region, to allow building an international airport and a seaport, reopening the Rafah border crossing and the expansion of fishing area for Gazan fishermen.

According to AFP's report released yesterday, the Palestinian leadership is demanding the international community set a deadline for Israel to end its occupation of the territories. The Palestinian leadership is preparing "to go to the U.N. Security Council to enforce an end to the (Israeli) occupation," senior Palestine Liberation Organisation official Wasel Abu Yusef.
RELATED TOPICS