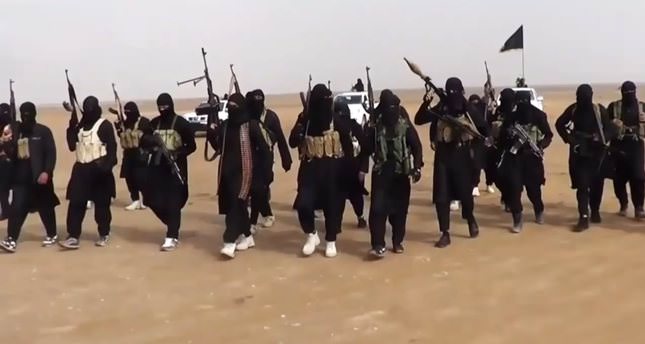 by Aug 27, 2014 12:00 am
The self-proclaimed Islamic State of al Sham (ISIS) militants have executed Syrian army soldiers and are holding a group hostage after capturing an air base in northeast Syria at the weekend, pictures posted on social media by supporters showed on Wednesday.

ISIS, an offshoot of al Qaeda, stormed Tabqa air base near Raqqa city on Sunday after days of fighting with the army that cost more than 500 lives, according to monitoring group the Syrian Observatory for Human Rights.

Tabqa was the army's last foothold in an area otherwise controlled by the militants, who have seized large areas of Syria and Iraq. The United States has carried out air strikes on the group in Iraq and is considering its options in Syria.

In one picture posted online, a group of militants in balaclavas are seen gunning down at least seven kneeling men identified as army personnel. It was not possible to immediately confirm the authenticity of the images.

Other photos showed groups of eight to 10 soldiers taken hostage, some with face wounds and three identified as officers. The photos appeared to show at least two dozen hostages.

One picture reportedly shows the body of a pilot who had appeared on Syrian television before the attack on the base explaining how the army could easily defend it. Others show militants holding up knives next to groups of captured men.

Syrian state television aired a report last week interviewing army personnel at the base and showing its defences, just before ISIS overran it.

After the capture on Sunday, Syrian state television said the military was "regrouping" and that there was a "successful evacuation of the airport" as the army continued strikes on ISIS in areas close to the base.

The Observatory said 346 ISIS fighters were killed and more than 170 members of the security forces had died in five days of fighting over the base, one of the deadliest clashes between the two groups since the start of the war.

The photos also showed the attack on the base, which used at least one tank. Other photos showed bodies and abandoned military hardware, such as a jet, warplane munitions and missiles, although it was not clear if any were operational.

"THEY SOLD YOU FOR CHEAP"

Syrian newspapers have had very little coverage of the air base capture and the state news agency SANA and Syrian television have since focused on army operations against ISIS elsewhere in the country.

Although it is not clear how widespread public anger in Syria might be about the fall of the airbase, some people supportive of the army expressed anger on social media.

The Facebook page "Eagles of the Tabqa Military Airport, Men of Assad," reposted the photo showing the apparent execution of the soldiers and wrote "No comment. They sold you for cheap, God damn all traitors."

"Thousands of people want to know the fate of their sons, and our only source is Islamic State," another user commented and made a sarcastic remark about the lack of coverage on SANA.

Some people on Twitter called for the resignation of the defence minister, with the hashtag "Minister of Death" in Arabic.

One activist who is from the same Alawite sect as President Bashar al-Assad but opposes him said people in the Alawite community in the coastal town of Tartous felt scared and angry.

"But as always they also believe there's nothing they can do about it, that they have no choice but the status quo because the alternative is scarier," he said when contacted online.

"A lot of loyalists here are optimistic after Walid al-Moualem's speech. They're hoping the world will come to help Assad in his fight against terrorism," he added.

Moualem, Syria's foreign minister, said on Monday that Damascus would cooperate in any international effort to fight ISIS. But a White House spokesman said there was no plan to coordinate with Damascus on how to counter the threat.

President Barack Obama approved U.S. surveillance flights to gather intelligence on the extremist group after the release of a graphic video last week showing the beheading of U.S. journalist James Foley by an Islamic State fighter.