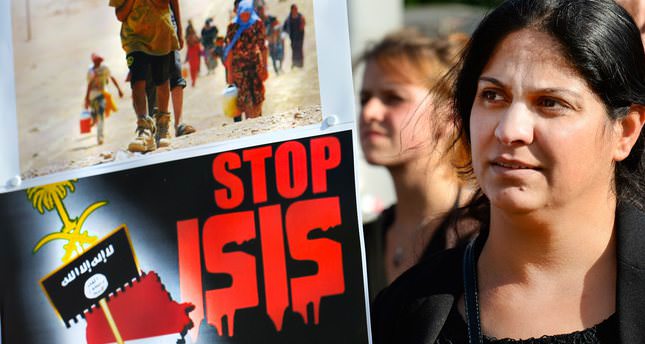 by Ragıp Soylu Aug 27, 2014 12:00 am
Enthusiastic talks on a possible independent Kurdish state in Iraq faltered after the Islamic State of Iraq and al-Sham (ISIS) proved that peshmerga forces needed to receive substantial U.S. and international help to protect their territory.

Since ISIS has gained ground rapidly and threatened the crucial Kurdish capital Irbil by seizing control of two small towns, Zumar and Sinjar, the vulnerability of a prospective Kurdish state was exposed. The offensive pushed tens of thousands of people, including Yazidis and Christians, to flee for their lives and prompted another huge humanitarian catastrophe in the first week of August. News agencies reported that the panic in Irbil mainly caused by rumors on social media about the horrors of the militant group even led senior Kurdish officials to evacuate their families, and many expats subsequently left the city. President of the Kurdistan Regional Government (KRG) Massoud Barzani also launched an investigation on peshmerga commanders who left their positions in the Kurdish town of Sinjar and failed to defend the people there.

Kurdish forces were only able to reclaim an important water source and Mosul Dam, a strategic defense point, following U.S. President Barack Obama's order for air strikes against ISIS forces. The Pentagon reported that since Aug. 8, U.S. Central Command had conducted more than 94 airstrikes across Iraq – 61 had been in support of Kurdish forces near Mosul Dam.

This sudden change on the ground dashed hopes for an independent Kurdistan as the U.S. and regional powers weren't supportive of statehood either. Although Turkey's ruling Justice and Development Party (AK Party) Deputy Chairman Hüseyin Çelik told the Kurdish publication Rudaw that Iraqi Kurds have the right to decide their future and a possible independent Kurdistan would not bother Turkey, the government spokesman and Deputy Prime Minister Bülent Arınç later clarified that Turkey still supports the territorial integrity of Iraq. "It was Hüseyin Çelik's personal opinion rather than Turkey's official position regarding the issue. Turkey still supports Iraq's unity but believes that Kurds will decide their future in the ongoing political process based in Baghdad," said Şaban Kardaş, the president of the Ankara-based think-tank ORSAM. The good relations between Turkey and KRG and much discussed oil trade eased Ankara's previous resistance against an independent Kurdistan, but the international community is still reluctant to give its blessing.

Barzani's promises regarding a referendum on independence for Kurdistan might not be able to be kept and high-ranking Kurdish officials now say that they need to take care of the immediate threat at their doors rather than focusing on statehood. Dlawer Ala'Aldeen, the founding president of the Middle East Research Institute, said that Kurds are heavily invested in the political process in Baghdad, following the election of President Fuad Masum. "The Kurdish delegation visited Baghdad and had talks with Prime Minister-designate Haydar al-Abadi said that they are hopeful he can meet Kurdish demands. Kurds have lost their faith in Iraq and wish they didn't have to go back to Baghdad but are doing so out of necessity and lack of choice." he added.

The KRG is getting through a fiscal crisis as well. After former Iraqi Prime Minister Nouri al-Maliki's withdrawal or blockage of essential governmental funds belonging to the KRG, all the money they had in their accounts quickly dried up. Now, the oil trade with Turkey is very crucial for the much needed financial resources to pay the salaries of government officials. Experts say that the KRG asked for money from Irbil's rich residents to contribute to the administration's recent expenses against the ISIS threat.

On the U.S. side the Obama administration is not siding with an independent Kurdistan yet. Once a well-known supporter of Iraq's partition, U.S. Vice President Joe Biden penned an article for The Washington Post last week saying that Iraq's future depends on a "functioning federalism" under the Iraqi constitution, "which would ensure equitable revenue-sharing for all provinces and establish locally rooted security structures."

Biden said that the U.S. will be prepared to offer training and other forms of assistance under the Strategic Framework Agreement to help such a model work.