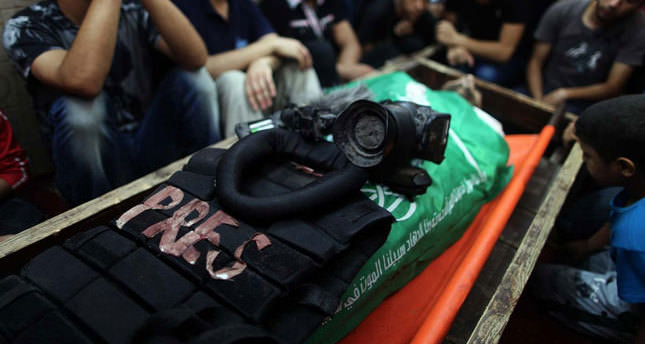 by Daily Sabah Aug 27, 2014 12:00 am
Israel continues to target government buildings and residential areas, destroying the homes of unarmed civilians and killing scores of Palestinians. Apart from Palestinians, many local and foreign journalists covering the fighting have been endangered while the Israeli government announced that it would take no responsibility for their safety.

Since the beginning of Israel's deadly offensive on July 8, 17 journalist have reportedly been killed. According to reports, a reporter, Abdullah Murtaja for the al-Aqsa TV channel, broadcasting from Gaza was killed on Monday in an airstrike on Gaza City. Two other journalists were reportedly killed in the same airstrike in eastern Gaza City.

Meanwhile, Israeli planes fired a missile into the headquarters of the Palestinian Legislative Council in the blockaded Palestinian territory on Tuesday. The Israeli onslaught continued by hitting a school in the Zaytoun district and another in the Shujaya neighborhood in eastern Gaza City.

On Tuesday morning, Israel bombed two towers containing dozens of homes and shops in central Gaza City, totally destroying one and another severely damaging the other. Since last weekend, Israeli raids have begun to destroy large buildings, toppling five high-rises increasing its pressure on Hamas militants. However, it has been civilians who have paid the price for the ongoing Gaza war so far, even though the Israeli military claims that it has only targeted sites linked to militants.

The latest strikes came after Egypt called on Israel and Hamas' delegations to restart indirect talks to reach a more comprehensive and permanent cease-fire. The Egyptian proposal offers "a gradual easing of restrictions on trade and movement in and out of Gaza" in order to facilitate the delivery of humanitarian aid and reconstruction material in the Gaza strip.

Since the collapse of a temporary ceasefire with Palestinian groups in the enclave on Aug. 19, the Israeli military has continued to hit targets in the besieged enclave. The Israeli military stated that it will continue military operations to target Hamas militants in Gaza and destroy their infrastructure with the sole aim of demilitarizing the Palestinian territory. Since the start of the war on Gaza, at least 2,133 Palestinians have been killed so far with more than 11,000 wounded, according to Palestinian health officials.
Last Update: Aug 27, 2014 2:08 am
RELATED TOPICS