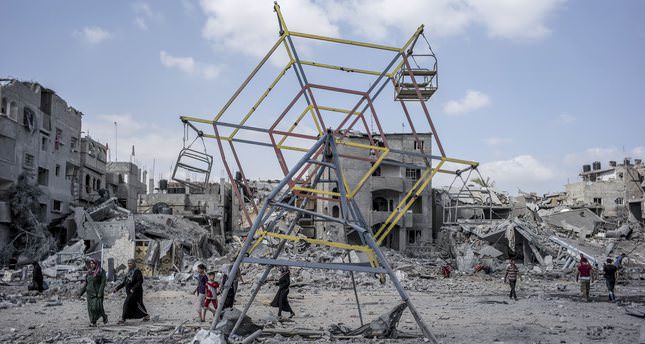 by AA Aug 27, 2014 12:00 am
Turkey welcomed the unlimited ceasefire that was agreed between Israeli and Palestinian officials on Tuesday.

The Egyptian-brokered ceasefire came into effect at 16:00 GMT Tuesday, bringing 51 days of relentless Israeli attacks to a halt in the blockaded coastal enclave.

"We consider the ceasefire as the beginning of the entry of humanitarian aid for the reconstruction of the country," said a written statement by Turkey's Foreign Ministry on Wednesday.

Since hostilities first erupted on July 7, at least 2,143 Palestinians, mostly civilians, have been killed and nearly 11,000 injured in relentless Israeli attacks, according to the Palestinian Health Ministry.

The ministry also reiterated Turkey's firm stand on supporting Palestine during the Israel-Palestine clash and said the ceasefire is a valuable opportunity to end the violence in the region.

In the meantime, thousands of homes across the coastal strip have been partially or completely destroyed by the Israeli bombardment.

Over the same period, at least 69 Israelis-64 soldiers and five civilians-have been killed, according to Israeli figures.