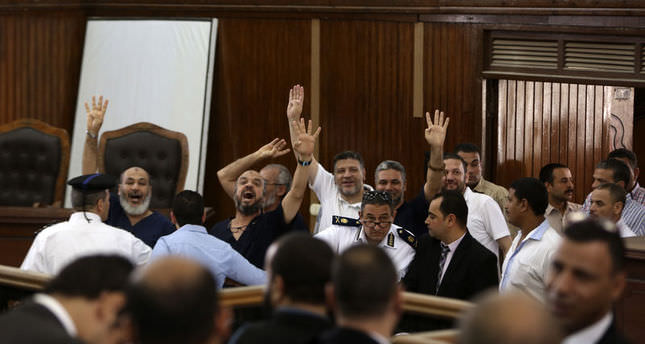 by AA Aug 28, 2014 12:00 am
An Egyptian court on Thursday-in two separate trials-slapped 18 supporters of ousted president Mohamed Morsi with jail terms ranging from 28 to 43 years each, judicial sources have said.

The court also acquitted five defendants who were being retried after having been previously sentenced to life in prison-or death-in absentia, the sources said.

Morsi, who won Egypt's first free presidential election in 2012, was ousted by the military in July of last year following protests against his single year in office.

Former army chief Abdel-Fattah al-Sisi, widely seen as the architect of Morsi's ouster and subsequent imprisonment, was declared winner of a presidential poll held in May.

Since Morsi's ouster last year, Egypt's military-backed authorities have waged a relentless crackdown on his supporters-and on other political dissidents-in which hundreds have been killed and thousands thrown behind bars.

The Egyptian government has blamed Morsi's Muslim Brotherhood for a series of deadly attacks on security personnel since Morsi's ouster-allegations the group denies.