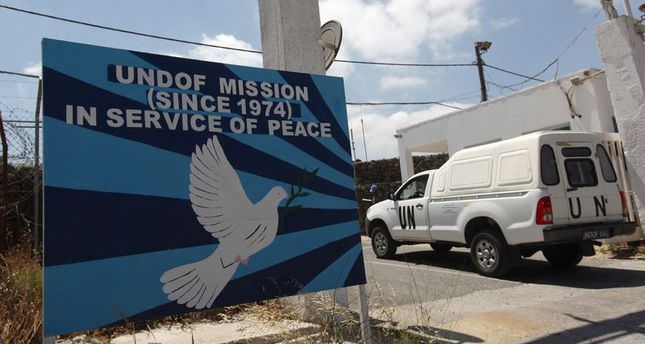 by Anadolu Agency Aug 30, 2014 12:00 am
Thirty-two U.N. peacekeepers were rescued from militants who had fired on their post on the Syrian side of the Golan Heights on Saturday, the United Nations said.

Another group of U.N. soldiers - also from the Philippines - remained trapped by the militants who surrounded their positions on Thursday, and a gun battle was ongoing, the U.N. press office said.

The troops are part of UNDOF, a U.N. force that has monitored the disengagement zone between Israel and Syria since 1974, after the 1973 Arab-Israeli war.

A Reuters cameraman spotted 11 U.N. armoured vehicles returning to their base in Israeli-controlled territory about 12 hours after the peacekeepers came under fire at around 6 a.m. (0400 GMT) on Saturday.

All 75 Filipino troops serving as UN peacekeepers in the Golan Heights are now safe after the last batch slipped away under cover of night from besieging Syrian rebels, military spokesmen said Sunday.

"Everyone is in a safe position. We left our (old) position but we brought all our arms," said Lieutenant Colonel Ramon Zagala.
Another 44 UNDOF peacekeepers, from Fiji, were detained by militants 8 km (5 miles) away from the Philippine troops on Thursday and remain missing.

UNDOF has 1,223 peacekeepers from six countries operating in the zone.

The Golan is a strategic plateau captured by Israel in the 1967 Middle East War, and Syria and Israel technically remain at war. UNDOF monitors the area of separation, a narrow strip of land running about 70 km (45 miles) from Mount Hermon on the Lebanese border to the Yarmouk River frontier with Jordan.