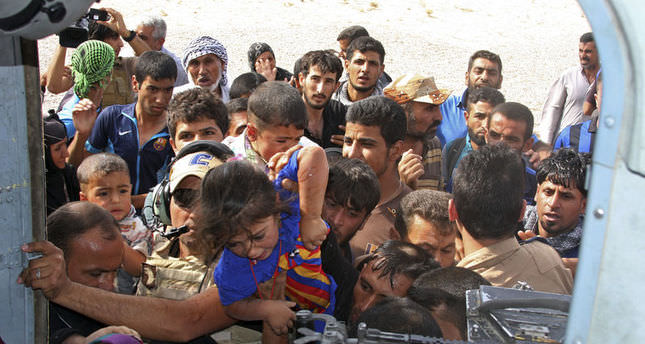 by Aug 31, 2014 12:00 am
Western warplanes dropped desperately needed aid on Sunday to an Iraqi Shiite town under blockade by self-proclaimed Islamic State of Iraq and al-Sham militants for well over two months as preparations to break the siege dragged on.

The aid drops were accompanied by US air strikes and were the furthest south that US forces have intervened in Iraq, barring reconnaissance flights, since their withdrawal in December 2011.

The mainly Turkmen residents of the Salaheddin province town of Amerli, where the United Nations has warned of the risk of sectarian massacre by the besieging ISIS extremists, have been running desperately short of food and medicines.

Thousands of Shiite militiamen and Kurdish fighters have been massing for days for an operation to break the siege, alongside the Iraqi army, which was left in disarray by the lightning offensive the ISIS militants launched in second city Mosul in early June.

But it has so far been reluctant to expand its operations amid Pentagon warnings that military intervention alongside Baghdad government forces risks further alienating Sunni Arabs without more strenuous efforts by the Shiite-led administration to engage the disenchanted minority community.

Shiite militia and Kurdish forces closed on the besieged enclave on Sunday, reaching within five kilometres (three miles) of the forces inside it, militia commander Mohammed Mahdi al-Bayati said.

Australian, British, French and US aircraft dropped relief supplies to the thousands of civilians trapped in the enclave.

"At the request of the government of Iraq, the United States military today airdropped humanitarian aid to the town of Amerli," said Pentagon spokesman Rear Admiral John Kirby.

"The United States Air Force delivered this aid alongside aircraft from Australia, France and the United Kingdom, who also dropped much needed supplies."

The aid drops came alongside "coordinated air strikes against nearby ISIS terrorists in order to support this humanitarian assistance operation," he added.

He was referring to the ISIS militant forces.

"The operations will be limited in their scope and duration as necessary to address this emerging humanitarian crisis and protect the civilians trapped in Amerli," Kirby said.

US Central Command said the US supplies dropped included around 47,775 litres (10,500 gallons) of drinking water and 7,000 pre-packaged meals.

"The US military will continue to assess the effectiveness of these operations and work with the Department of State, the US Agency for International Development, as well as international partners including the government of Iraq, the United Nations, and non-government organisations to provide humanitarian assistance in Iraq as needed," Kirby said.

Kurdish forces retook the dam after briefly losing it to the jihadists earlier this month, securing the source of much of the power and irrigation water for the region around Iraq's second city.

The ISIS and its allies control swathes of both northern and western Iraq and neighbouring northeastern Syria where their rule has witnessed a spate of atrocities that have shocked the world.

Washington has thus far ruled out any cooperation with the Damascus regime against the jihadists but has attempted to enlist the support longtime foe Tehran, a key backer of Syrian President Bashar al-Assad.

Writing in the New York Times, US Secretary of State John Kerry urged "a united response led by the United States and the broadest possible coalition of nations" to combat ISIS.

Kerry said he and Defence Secretary Chuck Hagel would meet European counterparts on the sidelines of an upcoming NATO summit to enlist assistance, and then travel to the Middle East to build support "among the countries that are most directly threatened".

US President Barack Obama has acknowledged that Washington has no strategy yet to tackle ISIS, which has declared an Islamic "caliphate" in the territory under its control in Iraq and Syria.