Gazans will need 20 years to rebuild their enclave 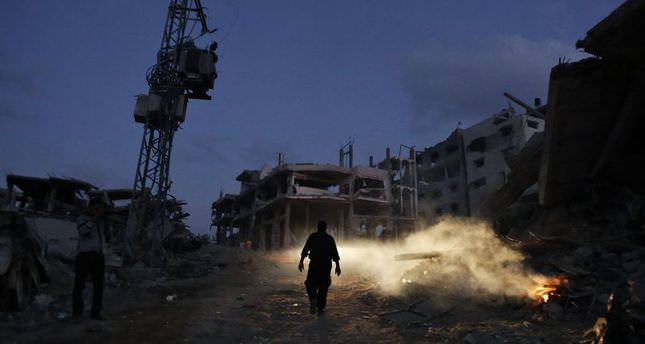 by Daily Sabah Sep 01, 2014 12:00 am
Gazans will need 20 years to re-build the ruined Gaza Strip after the most recent Israeli military operation, according to Shelter Cluster, which operates in troubled areas around the world in cooperation with other international organizations. The group is chaired by the Norwegian Refugee Council and is backed by the U.N. refugee agency and the Red Cross. Israeli strikes caused the total destruction of at least 17,000 homes while 5,000 units still need to be repaired due to damage from previous battles, according to Shelter Cluster. According to a recently released report on Gaza by the group, Gaza also has a housing deficit of 75,000 units.

Some Palestinian officials have estimated the massive restructuring could cost more than $6 billion (TL 13 billion). The housing assessment was based on the current level of goods allowed to be transferred from Israel to Gaza, which has a population of about 1.8 million. However, any effort to rebuild Gaza will be prevented due to the Israeli and Egyptian blockade. Hamas, which Israel considers a terrorist organization, took over power in Gaza in 2007 after elections, and Israel claims that they use any construction material to build tunnels and rockets to attack Israel.

Israel's defense establishment said it is better for Israel to ease the restrictions and prevent a social and economic meltdown in Gaza. According to the Israel-based daily Haaretz, a senior Israeli military officer said, "It is in Israel's interest to avoid intense social and economic pressure on Gaza. If we can assist by expanding fishing grounds and easing restrictions on border crossings of people and goods into and from Israel, this will help maintain the quiet."

Yet, Egypt is not eager to open its border for the importation of materials and is continuing its restrictions, according to Egyptian media outlets. Also, Israeli Prime Minister Benjamin Netanyahu continued his aggressive rhetoric against Gaza saying: "We decided not to get bogged down in Gaza, and we could have, but we decided to limit our objective and restore calm to Israeli citizens. I cannot rule out the occupation of Gaza. I do not know if we will get to that. I thought the best thing is to crush them [Hamas]. It might be that they [Hamas] are still there, but they are crushed, isolated and unable to smuggle in arms. I think that creates a chance for prolonged quiet, but if not, I won't bear a drizzle of rockets." Netanyahu's words indicate that Israel will not easily decide to turn Gaza into a habitable area through allowing the importation of building materials.

However, the strikes also have a cost for the Israeli economy. The Israeli cabinet will allocate at least $500 million to cover the cost of the Gaza operation. The financial cost of the operation in the third and longest Gaza war in six years is estimated at around $3 billion to $4 billion, experts say. Israel's defense ministry has demanded a grant for a similar sum to restock on ammunition, including for its Iron Dome defense system. If it gives into the financial demands of a powerful military lobby, the government could be forced to cut budgets elsewhere and increase taxes, bringing socio-economic pressure on its population. Almost 2,200 Gazans including women, children and the elderly were killed in the 50 days of the Israeli operation in Gaza and around 11,000 others were injured.
Last Update: Sep 01, 2014 1:20 am
RELATED TOPICS