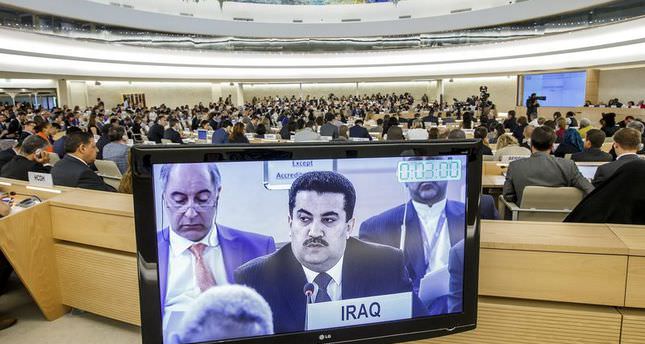 by Sep 01, 2014 12:00 am
The UN Human Rights Council on Monday debated whether to send an emergency mission to Iraq to investigate suspected "crimes against humanity" by the self-proclaimed Islamic State of Iraq and al-Sham (ISIS), as Baghdad called the militants an "imminent threat" to the world.

The special session was called at Baghdad's request, with support from the five permanent members of the UN Security Council -- Britain, China, France, Russia and the US -- among other countries.

"The reports we have received reveal acts of inhumanity on an unimaginable scale," deputy UN rights chief Flavia Pansieri told diplomats from the 47 member states as she opened the emergency session. She listed targeted killings, forced conversions, abductions, slavery, sexual violence and torture and the targeting of ethnic and religious communities.

The ISIS has grabbed large swaths of Iraq's Sunni heartland since June 9. It has also occupied parts of Syria and declared a "caliphate" in a region straddling the two countries.

The group shocked the world last month with its filmed beheading of US journalist James Foley.
A decision was expected later Monday, with diplomatic sources saying they expected the text to pass by consensus.

The UN has accused the group of committing war crimes and crimes against humanity, including "ethnic and religious cleansing", and has warned of the risk of "genocide" in parts of Iraq.

At least 1,420 people were killed in the country last month alone, according to fresh UN numbers issued Monday, while more than 1.6 million people have fled their homes since the beginning of the year -- 850,000 of them in August.

Sudani stressed that ISIS "is not an Iraqi phenomenon" but "a transnational presence that poses an imminent danger for all countries of the world."
Iran's ambassador Mohsen Naziri Asl also urged "all member states to unite against this threat."
The draft resolution condemned "in the strongest possible terms systematic violations and abuses of human rights and violations of international humanitarian law resulting from the terrorist acts committed by ISIS and associated groups."
It called on the office of the UN's brand new High Commissioner for Human Rights, Jordan's Prince Zeid al-Hussein, to dispatch investigators to Iraq.
If a team is sent, it would give an update to the Council at its next regular session which starts next week, and a full report at a session starting in February.
The text urges the international community to "strengthen their efforts in assisting Iraq in restoring peace, stability and security in the areas controlled by ISIS and associated groups," and insists on the need to hold those responsible for any atrocities to account.
French ambassador to the UN in Geneva, Nicolas Niemtchinow, slammed ISIS as "a monster that continues to perpetrate barbaric crimes."
"The stories that have emerged from ISIS's bloody assault on Iraq are the ones of nightmares," agreed US ambassador to the Rights Council in Geneva, Keith Harper, insisting it was "critically important that the council responds."
Russian representative Alexey Borodavkin meanwhile said Russia was delivering weapons to fight the militants, and laid blame for the rise of IS on countries helping the opposition fight President Bashar al-Assad's regime in neighbouring Syria.
"The current tragedy in Iraq is clear proof of the fact that the unlawful, external interference leading to the destruction of statehood do not give rise to democracy," he said.