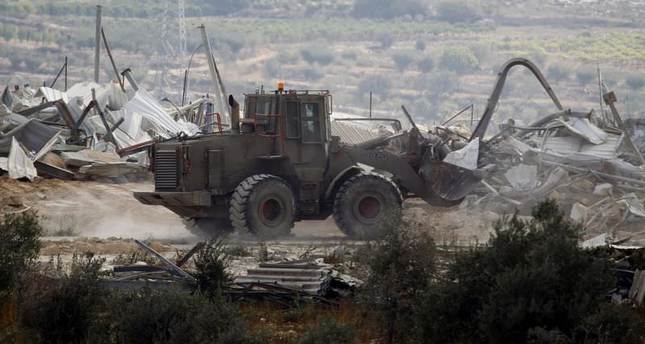 by Daily Sabah Sep 03, 2014 12:00 am
Israel's latest decision to appropriate 400 hectares of land in the West Bank has drawn international condemnation since the beginning of this week. European countries' officials echoed the U.S. rebuke to Israel, and they all urged Israel to reverse its decision. European governments and the U.N. stated their objections to Israel's current "illegal" settlement constructions.

A statement on the France's Foreign Ministry website on Monday said: "France condemns the decision of the Israeli authorities to confiscate 400 hectares of land in the Bethlehem governorate in favor of the nearby settlement of Gva'ot.France calls for the Israeli authorities to reverse their decision." British officials also deplored Israel and declared the new settlements as illegal. "Our position on settlements is clear: They are illegal under international law, present an obstacle to peace and take us further away from a twostate solution at a time when negotiations to achieve this objective urgently need to be resumed," said Philip Hammond, the UK Foreign Secretary on Monday. David Cameron used tough language in the House of Commons as he described the Israeli move as "utterly deplorable." Protests also came from Spain and Italian Foreign Minister Federica Mogherini, while the EU officially condemned Israel.

U.N. Secretary-General Ban Ki-moon voiced alarm in an announcement on Monday. "The seizure of such a large swathe of land risks paving the way for further settlement activity, which, as the U.N. has reiterated on many occasions, is illegal under international law and runs totally counter to the pursuit of a two-state solution," Ban's spokesperson said in the statement. Ban called on Israel to "heed the calls of the international community" to refrain from settlement activity, which runs counter to the pursuit of a two-state solution to the Israeli-
Palestinian conflict. U.S. Ambassador to Israel Dan Shapiro has conducted several conversations with senior Israeli officials to express the administration's displeasure.

The official, who asked not to be named, said they would discuss a Palestinian proposal for a timetable to end the Israeli occupation of Palestinian territories. Israel Radio reported on its website Wednesday that Kerry and Netanyahu also discussed on the telephone the resumption of negotiations on a durable ceasefire in the Gaza Strip. However, according to AA, Israeli army armored vehicles entered Gaza's Rafah border for the first time since the ceasefire in Gaza. The Israeli army's armored vehicles entered the En-Nahda neighborhood 100 meters from the Rafah border. It is claimed that bulldozers plundering the land entered the area to search for the body of Israeli soldier Had Goldin.