Paris suspends delivery of warship to Russia over Ukraine 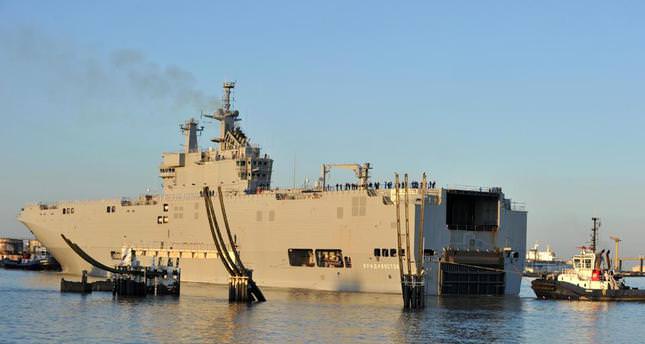 by Sep 03, 2014 12:00 am
France said Wednesday "conditions" were not in place to deliver the first of two Mistral-class warships to Russia, a move planned later this year that has sparked controversy given the crisis in Ukraine.

"The President of the Republic declared that, despite the prospect of a ceasefire which still remains to be confirmed and implemented, the conditions for France to deliver the first warship are not to date in place," Francois Hollande's office said in a statement, on the eve of a major NATO summit.

The situation in Ukraine is "serious... the actions taken recently by Russia in Eastern Ukraine go against the foundations of Europe's security," added the statement, issued after a meeting of France's defence council.

France agreed in 2011 to build and sell the two advanced helicopter assault ships to Russia for a total of 1.2 billion euros ($1.6 billion) with the first scheduled for delivery in October or November and the second in 2015.

However, Hollande acknowledged in a recent interview in Le Monde daily that "if there was additional tension and it was impossible to find a way out, we would have to think about it".

That interview was carried out before widespread accusations that Russia had sent troops into Eastern Ukraine.

The United States has already taken aim at the proposed sales, with President Barack Obama expressing "concerns" and saying it would have been better to "hit the pause button" on the deal.

Since the beginning of the summer, some 400 Russian sailors have been training in Western France on the operation of the first warship, named "Vladivostok".

The concern in France, which is suffering from record-high unemployment and stagnant growth, is that it not only loses the receipts from this sale but also that its credibility as a weapons exporter is compromised.