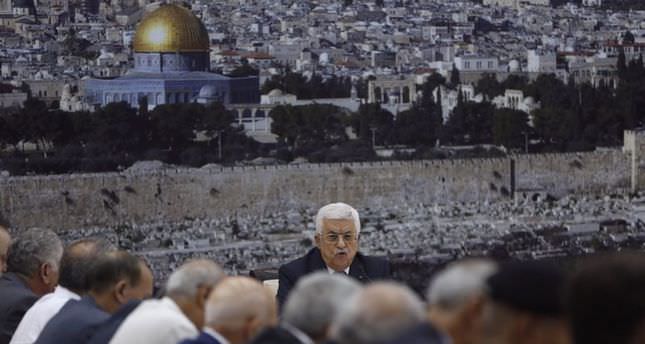 by Sep 07, 2014 12:00 am
Palestinian president Mahmud Abbas has threatened to break off a unity agreement with Hamas if the movement does not allow the government to operate properly in the Gaza Strip.

The threat drew an angry reaction from Hamas, which denounced the president's allegations as "baseless" and raised fresh questions over the future of a fragile intra-Palestinian unity deal aimed at ending years of bitter rivalry.

"We will not accept the situation with Hamas continuing as it is at the moment," Abbas said on arrival in the Egyptian capital late Saturday, in remarks published by official Palestinian news agency WAFA.

"We won't accept a partnership with them if the situation continues like this in Gaza, where there is a shadow government... running the territory," he said.

"The national consensus government cannot do anything on the ground," he charged.

Abbas's remarks came on the eve of talks in Cairo with Egyptian President Abdel Fattah al-Sisi and a key address to the Arab League nearly two weeks after a ceasefire ended a major 50-day confrontation with Israel in Gaza.

In Gaza, spokesman Sami Abu Zuhri denied charges Hamas was hampering the operations of the national consensus government, the composition of which was jointly agreed on by the former rivals.

"Abbas's statements against Hamas and the resistance are unjustified," Abu Zuhri said in a statement.

"It is untrue, baseless and unfair to our people," he said, indicating that Hamas representatives would meet "soon" with their counterparts in the rival Fatah movement to discuss fleshing out the reconciliation deal that was inked in April.


Under the terms of the agreement, the Palestinians agreed to form an interim consensus government of technocrats, ending seven years of rival administrations in the West Bank and Gaza.

The unity deal sought to end years of bitter and sometimes bloody rivalry between the Hamas movement and its Fatah rivals who dominate the West Bank-based Palestinian Authority.

Despite the handover, Hamas has remained the de facto power in Gaza, with moves to implement the provisions of the unity agreement put on hold in the face of the deadly offensive that Israel launched on July 8.

Throughout the conflict, Hamas and Fatah put up a united front, working side-by-side to further indirect truce talks with Israel in Cairo, which resulted in an open-ended ceasefire that took effect on August 26.

But as the guns fell silent, their long-held divisions again came to the fore.

Even before the violence erupted in Gaza, cracks were beginning to show in the unity deal, with the two sides at loggerheads over the question of salaries for Hamas's former government employees.

The dispute centres on who will pay the wages of some 42,000 civil servants who had not been paid for months before the Hamas government stepped down.

Qatar has agreed to cover the costs of the former Hamas employees, although the money has yet to be transferred.