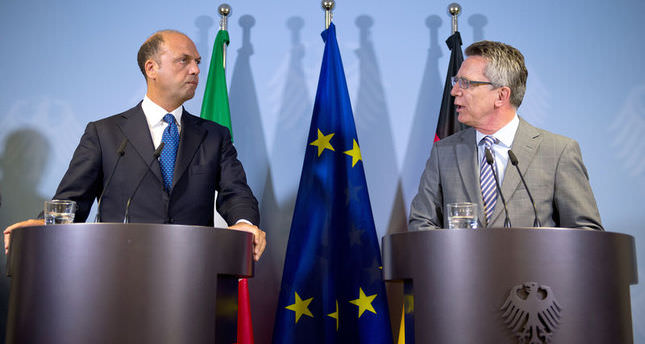 by Daily Sabah Sep 10, 2014 12:00 am
As the cradle of Christianity, Italy and Rome are "non-secondary" targets of the Islamic State of Iraq and al-Sham (ISIS), Italian Interior Minister Angelino Alfano said Tuesday, while stressing there have not been any "investigative evidence of terrorist plans in our country." While ISIS had hitherto- unseen resources, he told the Italian Parliament, there was no detected or reported terrorist risk from migrants reaching Italy from crisis zones like Syria and Iraq. Alfano said that at least 48 people are known to have left Italy to fight in Syria.

One young man from Genoa bearing an Italian passport was killed in Syria in June, Alfano said at a meeting on security in the Lower House. Italy must also strengthen its laws to deal with the threat of militants heading to theaters of war such as Syria, he added. Earlier, he warned that ISIS has "unprecedented resources" to fund its terrorist activities. It has resources "that no other (terrorist group) has had before," he told the House. Touching on whether the militants enter Italy he said, "There are no signs ISIS combatants might be infiltrating Italy via migrant vessels coming from northern Africa. We do not underestimate anything, and we must not rule out that possibility."

Meanwhile, French President François Hollande announced that he would visit Iraq on Friday to pledge his support to the fight against ISIS ahead of a conference on Iraqi security set for Sep. 15 in Paris. With the agreement of the Iraqi authorities, the president has confirmed that an international conference on the peace and security of Iraq will take place in Paris on Sept. 15. "It will bring together international and regional partners who share this goal and who are helping to bring it about," a statement from the Elysée presidential palace said. Iraqi President Fuad Masum as well as regional and international leaders will attend the talks. France will be one of the main partners of a coalition that will be led by the U.S. and created in coming weeks.

French Muslim leaders have issued a joint statement to denounce ISIS' horrific acts of mass killing, torture and displacement of people. The leaders, in a "Paris Appeal" issued Tuesday at the Grand Mosque in the French capital, said, "Barbarians are perpetrating the worst crimes against humanity and now threaten people [as well as] stability and peace among the people of the entire region." Although the world harshly opposes ISIS, the group's new atrocity against the Yazidi community was revealed after a mass grave containing the remains of 35 Yazidi was found in the northern Iraqi province of Mosul. Kurdish peshmerga soldiers discovered the corpses and identified them as being the remains of Ezidi - a Kurdish ethnic community based primarily in northern Iraq - by their clothes, said Said Memo, a spokesman for the Kurdistan Democratic Party (KDP) on Wednesday. "The mass grave included the bodies of women and children. The people may have been killed when ISIS militants were crossing the region last month," Said concluded.