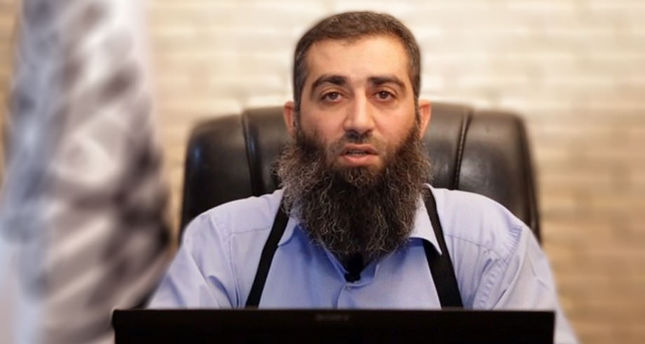 A total of 23 commanders of the relatively moderate Ahrar al-Sham opposition group were killed with sarin gas in Syria by ISIS, while Obama was set to declare a roadmap for eradicating ISIS from the region

On Tuesday, there was an explosion in a basement where top officials of the Syrian Ahrar al-Sham group, which is under the umbrella of the Islamic Front, were holding a meeting. Although initial reports claimed that it was a car bomb, a Daily Sabah source said that sarin gas was placed in the meeting area before the officials arrived. According to unconfirmed information, at least 45 people died. Speaking to Al-Jazeera, Abu al-Mustafa al-Ambsi, a member of the political bureau of Ahrar al-Sham said: "There is a possibility that the meeting was infiltrated and an explosion happened first in the bunker.Maybe someone planted a device inside because the bunker is at a secret location."

These people formed the main body of the group. Although the group immediately named a new leader, it remains unclear whether the group, which has around 20,000-armed members, will be able to continue its operations as effectively as they were before. A spokesman for Ahrar al-
Sham said Wednesday in a video statement posted online that Hashem al-Sheik Abu Jaber would assumed overall leadership of the group, while Abu Saleh Tahan would fill the role of military chief. Longtime chief Hassan Aboud was a well-known and influential leader in the country, not only in Ahrar al-Sham, but also in other groups like the Free Syrian Army (FSA).

While the group has not declared who was behind the attack, the Daily Sabah source said the Islamic State of Iraq and al-Sham (ISIS), an offshoot of al-Qaida, was definitely behind the attack. ISIS sympathizers hailed the death of Abboud on social media through creating hash tags and accusing Ahrar al-Sham of allying with the West. Another of Ahrar al-Sham's leaders, Abu Khaled al-Souri, a close associate of al-Qaida leaders Osama bin Laden and Ayman al-Zawahiri, was killed by ISIS a few months ago. It was known that Ahrar al-Sham is one of the strict opponents of ISIS and accuses ISIS of undermining the Syrian revolution through declaring war on other opposition groups that are fighting against the Syrian regime, headed by President Bashar al-Assad.

Ahrar al-Sham was one of the first armed groups that emerged to topple the regime and has been one of the best organized. It was founded in Hama and Idlib in early 2011 by former Islamist political prisoners and Iraq war veterans held in the Sednaya Prison north of Damascus after their release from jail in early 2011. The founders had a Salafist understanding of Islam but, as opposed to ISIS, were at peace with the traditions of people and other groups like the Sufis. The group has never been a part of the Westernbacked FSA, but has also not refused to ally with them. The group never became a branch of al-Qaida either through consistently stating that their battle is limited to Syria. Ahrar al-Sham also sought to ally pragmatically with all groups fighting Assad's government, including al-Qaida's Nusra Front and Western- backed FSA factions.

The group fought against Hezbollah, a Shiite faction allied with the Syrian regime, although there was no anti-Shiite rhetoric at the beginning. Officials had vowed to protect minority rights including those of Christians and members of several other beliefs.

The timing of the attack coincided with U.S. President Barack Obama's speech saying that he would declare his administration's strategy and road map against ISIS.The U.S., according to a statement released by the Department of Defense yesterday, has conducted a total of 153 airstrikes in Iraq. However, airstrikes may be expanded into Syria with the understanding that it is crucial who will be the U.S.'s partners in the country, which is suffering from chaos and violence on several fronts. ISIS sympathizers have accused Ahrar al-Sham of allying with the U.S. like the FSA does. The question was raised as to whether Ahrar al-Sham was going to be one of the U.S.' partners during the attacks. ISIS may be sending a message to the U.S. as the group had previously declared that it was not as easy to target them in Syria as it has been in Iraq. Despite ISIS' threats, Obama is prepared to authorize airstrikes in Syria, a senior administration official said on Tuesday.