Over 40 states combine forces against ISIS 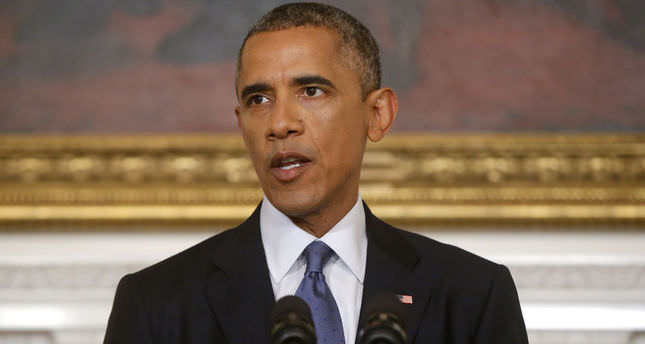 Officials say more than 40 countries have agreed to join an international coalition to fight the terror group.

The United States plans to broaden its offensive against the self-proclaimed Islamic State of Iraq and al-Sham (ISIS) militants in conjunction with building an international coalition, but President Barack Obama insists that these efforts will not include American boots on ground.

In an exclusive interview with NBC News, Obama said that he would announce the plan Wednesday in a televised address, underlining that the offensive will be launched with an international coalition.

The American president said that his administration has so far been focused on the problem of ISIS, assessed the situation on the ground, and ensured the security of American facilities in Iraq as well as other strategic structures such as the Mosul Dam.

"The next phase is now to start going on some offense," he said. "I will then meet with congressional leaders on Tuesday. On Wednesday, I'll make a speech and describe what our game plan's going to be going forward."

Obama underlined that any offensive on ISIS would not include U.S. troops on the ground and noted that the U.S. will use proxies such as Kurdish forces, the Iraqi army as well as moderate opposition in Syria.

It will be a multipronged approach including sharing intelligence, identifying and cutting funds, contributing to the political efforts on the ground as well as airstrikes, he said.

He also added that the plan would include airstrikes against ISIS in Syria but warned that these would not in any way benefit Syrian President Assad.

"It's going to require some resources, I suspect, above what we are currently doing in the region," he said. "We are going to be as part of an international coalition, carrying out air strikes in support of work on the ground by Iraqi troops, Kurdish troops."

Obama underscored that the U.S. would need Sunni states to help, including Saudi Arabia, Jordan, the United Arab Emirates and Turkey.

"They need to be involved. This is their neighborhood. The dangers that are posed are more directed at them right now than they are us," he said.
"Our goal should not be to think that we can occupy every country where there's a terrorist organization."

The U.S. helped Iraqi leaders to establish an inclusive government in Iraq, however, Syria has been a significant part of the chaos that IS created.

Thus, Obama views a Sunni opposition to be the best option to take stake in Syria.

"We're going to have to develop a moderate Sunni opposition that can control territory and that we can work with," he said.

The idea of an international coalition and broader action against ISIS was extensively discussed during a special session at the NATO summit in Newport, Wales, last week.

According to U.S. officials, more than 40 countries have agreed to be a part of the coalition, but those countries and their roles have not yet been disclosed.

U.S. Secretary of State John Kerry is currently in the Middle East in an effort to form the coalition, while President Obama and Vice President Joe Biden have had phone calls with several leaders to discuss the issue.

Kerry said a coalition against ISIS militants would need to be durable.

- Hostages and foreign fighters pave the way for coalition as the ISIS militant group established a safe-haven by erasing the borders between Syria and Iraq, its presence has created chaos in the Middle East that threatens the region and the West.

Following the recent brutal beheading of American journalist James Foley, hostages in the militants' captivity have received more visibility and the situation has allowed the U.S. to expand the scope of its operations against the terror group.

The concern for the lives of American hostages has been strongly articulated by U.S. officials and the American media, with officials in recent weeks raising the idea of a growing risk to hostages as time passes. The discourse implies the administration's motivation to expand the scope of its operations.

Killing American nationals, such as the beheadings of Foley and another journalist Steven Sotloff, works two ways. On the one hand, the terror group is sending a strong message to states in the region to refrain from engaging in operations against it, while on the other hand, the killings have paved the way for the U.S. to form a coalition to fight the insurgent group.

President Obama has at several times reiterated that he would take all necessary steps to protect Americans and has authorized more than 100 airstrikes on ISIS targets.

However, the brutal killings of Foley and Sotloff pushed the administration to do more.

Nevertheless, the administration has been clear that there will be no boots on ground as a strategy.

There is a growing concern that westerners who join ISIS militants will somehow return to their countries of origin and create terrorist bases, in part by engaging some of the most marginalized groups in Europe and the U.S.

There are several reports that claim that ISIS militants have the capability to conduct terrorist attacks on U.S. and European countries, but Obama has said that although the extremist group is not currently capable, it can evolve into a direct threat to the U.S. homeland.

The concern of foreign fighters and the threat to western nationals, particularly Americans, has placed significant pressure on the administration to reconsider the president's policy of substituting military engagements with diplomatic dialogue and political solutions.

Foreign fighters in ISIS has been viewed as one of the key rationales for a broad coalition to fight against ISIS, not only militarily but also politically and economically.

The U.S. failed to take credible action against possible war crimes in Syria including Syrian President Bashar al-Assad regime's use of chemicals weapons on civilians despite the removal of the declared stockpile from the country.

In order to clinch the need for a coalition and the expansion of the scope of operations against ISIS across the Middle East, particularly in Syria, U.S. officials and the American media have given a lot of airtime to the threat the group poses to Americans.

Day-long media exclusives have been granted to administration officials to talk about the extremist group's brutality and major media outlets, including The Associated Press, are giving a lot of coverage to U.S. officials presenting the the idea of war-crimes committed by IS and the need to address the threat.

A top-ranked U.S. official told the AP that "the surging ISIS group has an 'apocalyptic, end-of-days strategic vision' in the Middle East and cannot be defeated unless the United States and a coalition of partners confront it head-on in Syria."

Some rights groups, including the U.S.-based Amnesty International also contributed to the discourse by calling Foley's beheading, "a war-crime" and urged the international community to ensure other missing journalists are safely released.

Apart from the idea of war crimes, U.S. officials also points to the militant group's funding sources that it says puts responsibility on every single nation on the earth.

U.S. State Department deputy spokeswoman Marie Harf noted that the group's funding has come from a number of sources including criminal activity, bank heists, extortion, smuggling and kidnapping for ransom and raiding villages and towns.

U.S. Secretary of Defense Chuck Hagel acknowledged, "They are tremendously well-funded. Oh, this is beyond anything that we've seen. So we must prepare for everything," Hagel said.

Having a huge fund means that dealing with the insurgent group requires a number of different approaches as ISIS' capacity is well beyond that of an insurgent group.

Republicans have also called for a broader operation against ISIS.

"It's more than pinprick airstrikes," he said. "We're gonna need more boots on the ground – and that does not mean combat troops – but it does mean a significant increase."

McCain also said that Foley's death has sent a "strong message" to Americans that ISIS could stage an attack on U.S. soil. "They will be coming to America unless we stop them," he warned.