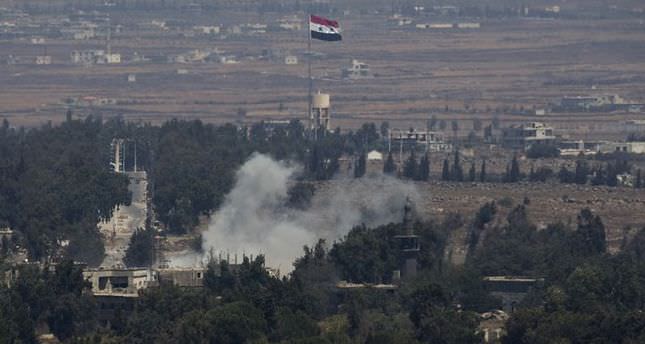 by Sep 10, 2014 12:00 am
In a major blow to Syria's hard-pressed rebels, the leader of one of the country's main opposition forces and other senior members were reported to have been killed in a bomb attack Tuesday that killed almost 40 people.

The Islamic Front alliance of opposition groups said in a statement published via its official Twitter accounts that the head of the Ahrar Al-Sham Islamic Movement, Hassan Abboud, also known as Abu Abdullah Al-Hamwi, and some of his companions had been killed.

"The Islamic Front gives the Muslim world the good news of the martyrdom of the head of Ahrar Al-Sham Islamic Movement," the front tweeted.

"They died through a car bomb while they were meeting in rural Idlib," the statement added.

Abboud's Ahrar al-Sham is one of Syria's largest rebel groups and a key component in the Islamic Front, a major rebel coalition formed in November. Abboud was also the head of the Islamic Front's political bureau.

The Syrian Observatory for Human Rights said that an explosion hit Ram Hamdan in northern Idlib province while Abboud and other leaders of Ahrar al-Sham were there, and "many of those present" were killed.

There was no immediate claim of responsibility for the attack. However, many blames the ISIS for the attack as the US is trying to create a unified front against the ISIS, and Ahrar Al-Sham is one of the possible candidates to join the effort.

The deaths come as Syria's rebels are caught between the resurgent forces of President Bashar al-Assad and the advances of the self proclaimed Islamic State of Iraq and Sham (ISIS) extremist group, which controls a swathe of northern and eastern Syria.

Ahrar al-Sham, seen as the most hardline major group not directly linked to al-Qaeda, was among the rebel forces fighting against the ISIS as the extremist al-Qaeda splinter group sought to monopolize rule over areas outside regime control.