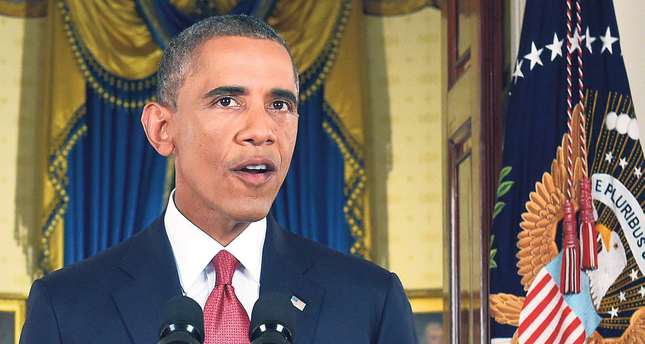 President Obama declared that the U.S. will be conducting airstrikes against ISIS militants in Syria with the help of partner countries and underscored that ISIS does not represent Islam

President Barack Obama told Americans on Wednesday he had authorized U.S. airstrikes for the first time in Syria and more attacks in Iraq in a broad escalation of a campaign against the self-proclaimed Islamic State of Iraq and al-Sham (ISIS) militant group. Obama's decision to launch attacks inside Syria, which is embroiled in a three-year civil war, marked a turnabout for the president, who shied away a year ago from airstrikes to punish Syrian President Bashar al-Assad for using chemical weapons against his own people.

In a widely anticipated, 13-minute White House speech, Obama said he would hunt down ISIS militants "wherever they are" in a drive to degrade and ultimately destroy the group, which has seized broad stretches of Iraq and Syria. "That means I will not hesitate to take action against ISIS in Syria, as well as Iraq. This is a core principle of my presidency: if you threaten America, you will find no safe haven," he said, speaking on the eve of the 13th anniversary of the Sept.11, 2001, attacks.

Obama asked Congress to authorize $500 million to train and arm "moderate" Syrian rebels. The training would take place in Saudi Arabia. It is unclear whether more American weapons and training can shift the battlefield balance toward the U.S.-backed rebels, who are badly outgunned by ISIS, other militant groups and Assad's forces. A vote on the money would put lawmakers on record supporting the military action, although White House officials stressed Obama already had the authority he needed for the new moves.

Obama plans to expand the list of targets inside Iraq beyond several isolated areas. The U.S. military has launched more than 150 airstrikes in Iraq in the past month to help halt ISIS advances. The new target list will include ISIS's "leadership, logistical and operational capability," as well as an attempt to "deny it sanctuary and resources to plan, prepare and execute attacks," the White House said. U.S. officials have warned it will take years to destroy ISIS, and Obama told Americans: "It will take time to eradicate a cancer like ISIS," the White House's acronym for the militant group. Obama added that ISIS does not represent the true Islam. He said "Now let us make two things clear: ISIL (using another name to refer the group) is not Islamic.

No religion condones the killing of innocents, and the vast majority of ISIL's victims have been Muslim. He added, "And ISIL is certainly not a state. It was formerly al-Qaida's affiliate in Iraq, and has taken advantage of sectarian strife and Syria's civil war to gain territory on both sides of the Iraq-Syrian border. It is recognized by no government, nor the people it subjugates. ISIL is a terrorist organization, pure and simple. And it has no vision other than the slaughter of all who stand in its way."

Obama will send 475 more American advisers to help Iraqi forces, which will bring to 1,600 the number there. Obama, determined to avoid a repeat of the Iraq war, stressed they would not engage in combat. The president laid out his emerging plan for tackling the group two weeks after coming under fire for saying: "We don't have a strategy yet" for the group in Syria and six months after declaring that groups like ISIS were minor players.
The U.S. view of the threat from ISIS now is that foreign fighters who have sworn allegiance to the group could return to their home countries and launch attacks against civilian targets, including in the United States. ISIS fighters beheaded two American captives in the past month, shocking Americans who have demanded Obama retaliate. "Our intelligence community believes that thousands of foreigners - including Europeans and some Americans - have joined them in Syria and Iraq. Trained and battlehardened, these fighters could try to return to their home countries and carry out deadly attacks," Obama said.

Republican lawmakers welcomed what they said was a tardy recognition that ISIS represented a threat to the United States. "A speech is not the same thing as a strategy, however," said House of Representatives Speaker John Boehner, the top U.S. Republican. "While the president presented a compelling case for action, many questions remain about the way in which the president intends to act." In a significant move that could help rally Gulf Arab states behind the U.S.-led coalition, key ally Saudi Arabia will host inside its territory a U.S. training effort for Syrian rebels, senior U.S. officials said.

The effort is dependent on the U.S. Congress approving the $500 million for the rebels. Congress is to consider the measure next week before lawmakers adjourn to campaign for Nov. 4 elections. The funding request generally has broad support.

The Saudi decision emerged after Obama spoke by phone earlier in the day with Saudi King Abdullah, who has pressed the American government to do more resolve the Syrian conflict. Obama, vowing he would not send U.S. combat forces back to the region, said he was building a broad anti-ISIS coalition involving Sunni-led governments in the region and Western allies.

U.S. officials want allies to join in attacks on the group as well as in training and equipping Iraqi forces and Syrian rebels, and providing humanitarian relief and intelligence.

What specifically each nation will do in the coalition remains to be hammered out. Secretary of State John Kerry is meeting Gulf allies in the region and Obama is to host a leaders' security conference at the U.N. General Assembly in two weeks with the aim of fleshing out duties of the coalition.
Before the focus on ISIS, Obama for months had been cool to the notion of arming the poorly organized Syrian rebels, fearing weapons provided them could end up in the wrong hands.

But he now needs the rebels to become strong enough to hold ground cleared by U.S. airstrikes, just as Iraqi forces are doing in Iraq. U.S. officials pushed back hard against the notion that striking ISIS strongholds in Syria would unintentionally help Assad. They said the Sunni-majority areas in the eastern part of the country the militants hold were not places where Assad loyalists would be able to take advantage to regain control. Obama's speech included a dollop of election-year politics as he seeks to rally Democratic voters to prevent Republicans from seizing control of the U.S. Senate. He said his policies had helped bring back the U.S. economy from a severe economic crisis that greeted him when he took office in 2009. "America is better positioned today to seize the future than any other nation on Earth," he said.