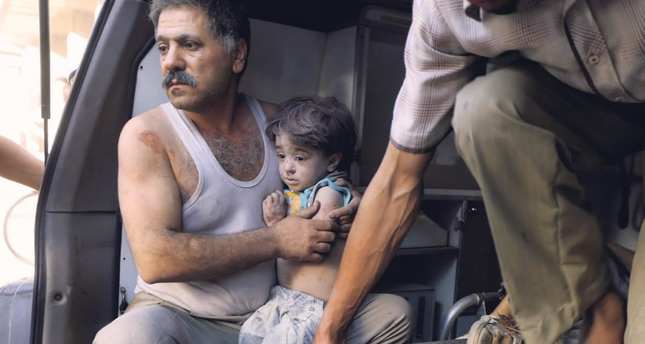 by Daily Sabah Sep 13, 2014 12:00 am
An air raid organized by the Syrian air force in Douma, a rebel-held area and a satellite suburb northeast of the capital that has been under siege for more than a year, killed at least 50 people on Thursday.

"The toll from regime air raids on Douma has risen to 50 dead, including seven children and two women," said the U.K.-based Syrian Observatory for Human Rights (SOHR), which on Thursday had tallied the deaths at 17. Activists posted videos on YouTube showing the destruction caused by the raids in Douma, a frequent target of deadly strikes. People could be seen carrying the charred remains of victims amid scenes of panic as firefighters battled to put out blazes in several buildings. The Syrian National Council said the buildings that were hit by the warplanes were residential areas and the victims were unarmed.

A witness, Youssuf al-Bostani told Anadolu Agency (AA) that 200 people were wounded including dozens of children and women. He added that the regime dropped bombs four times, following one after another.

The SOHR said more than 180,000 people have been killed in the Syrian conflict since it erupted in March 2011, while the U.N. puts the figure at 191,000. The war has displaced millions of people who had to flee to neighboring countries, including Turkey, Lebanon, Jordan and Iraq. Opponents of Bashar al-Assad took up arms in response to a bloody crackdown on peaceful prodemocracy protests inspired by the Arab Spring uprisings.
Last Update: Sep 13, 2014 1:42 am
RELATED TOPICS