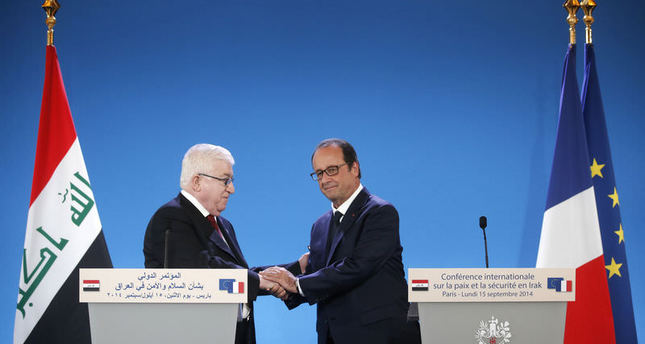 by Daily Sabah with Agencies Sep 15, 2014 12:00 am
A total of 30 countries present at an international conference on peace and security on Iraq agreed to provide Baghdad with "appropriate military aid" to combat insurgents of the self-proclaimed Islamic State of Iraq and al-Sham (ISIS), a statement issued after the talks said.

The statement issued by French officials said tackling the ISIS was "a matter of urgency", however it did not elaborate on what military aid was being envisaged.

Ahead of the conference which kicked off in Paris, French Foreign Minister Laurent Fabius blamed Syrian President Bashar al-Assad for the origins of the group, which has been running riot in large swathes of land in both Iraq and Syria.

"The Syria of Bashar al-Assad cannot be a partner," he told France Inter radio on Monday

Most countries - including the five permanent members of the Security Council of the United Nations - are being represented by their foreign ministers at the conference, which is jointly hosted by French President Francois Hollande and Iraqi President Fuad Massum.

"The conference aims to set a global strategy to fight against ISIS," said Hollande during his visit to Iraq last Friday.

Iran, an ally of the Syrian regime, was not invited, Tehran responding that it didn't want to participate in such a "show-conference" anyway, however Sergey Lavrov - the foreign minister of Russia, seen as highly supportive of the Assad regime - will be in attendance.

France is one of many countries to have put the blame at Assad's door for fomenting the violence that has allowed ISIS to thrive.

In June, Turkey's then foreign minister blamed the Syrian regime for the expansion of the group.

"The primary responsible of ISIS's advance in the region posing serious threat to the peace and security is the Assad regime which has been conducting massacres against its own citizen," Turkey's newly-elected Prime Minister Ahmet Davutoğlu told a joint press conference with German counterpart Frank-Walter Steinmeier in Istanbul.

Davutoğlu also blamed the United Nations for its failure "to protect Syrians."

Turkey is considered as a vital country in the region as it shares borders with both Syria and Iraq. It is represented at the conference by new Foreign Minister Mevlut Cavuşoğlu.

One of the primary goals of the conference is to define the contours of the international coalition, announced ten days ago by the United States to wage "war" against the ISIS. Other challenges are to decide methods of action to dry up funding to ISIS, to stem the flow and recruitment of militants from around the world, and to strengthen border controls.