Gaza poverty hits 90 pct as a result of Israeli siege 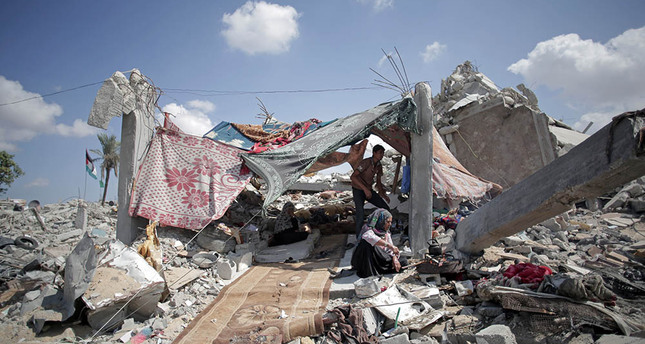 by AA Sep 16, 2014 12:00 am
Israel's years-long blockade and recent military onslaught has led to a catastrophic situation in the Gaza Strip, raising poverty rates in the embattled enclave to a whopping 90 percent, a Palestinian NGO has said.

In a Tuesday statement, the Popular Committee for Lifting the Siege on the Gaza Strip described the situation as "catastrophic."

According to the NGO, thousands of homes were destroyed during Israel's 51-day assault in July and August, while thousands of Gazans now live in shelters without basic amenities following the collapse of essential services such as electricity and water.

The committee has called for allowing construction materials-and other necessities-into the blockaded strip.

It noted that building supplies were badly needed for the strip's reconstruction so that Palestinians might immediately rebuild homes destroyed or damaged by the recent offensive, which ended on August 26 with the announcement of an open-ended cease-fire.

Israel has banned the entry of construction materials and other necessities into the Gaza Strip since Palestinian resistance faction Hamas swept Palestinian legislative elections in 2006.

The following year, the self-proclaimed Jewish state imposed an all-out blockade-by air, land and sea-on the coastal territory, playing havoc with the lives of the strip's roughly 1.9 million inhabitants.

More than 2,150 Palestinians were killed-and more than 11,000 injured-during Israel's recent war on the Gaza Strip.

Israeli attacks also totally destroyed 9,000 Gaza homes, while 8,000 others were partially destroyed, according to the Palestinian Housing Ministry.

Palestinian and Israeli negotiators signed a temporary cease-fire deal in Cairo on August 26. Both sides will soon return to the Egyptian capital to hammer out a permanent truce agreement.