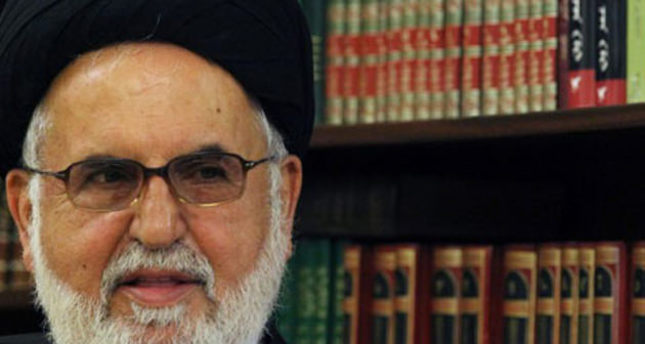 by Mehmet Akif Madenoğlu Sep 17, 2014 12:00 am
Harsh criticism for Iran is now coming from Lebanon from a prominent Shiite scholar, Sayyid Hani Fahs, who holds Iran responsible for the continuation of the civil war in Syria. In an interview with a Syrian media outlet close to opposition groups, Fahs claimed that despite his expectations, Iran has become an ultranationalist and sectarian figure in the region, and added this will harm political stability in the region.

Fahs emphasized that he backed the so-called Arab Spring from the very beginning: "I am human, I am Muslim, I am Lebanese and Arab, and I want reformation because our call for reformation includes liberation from tyrants, our call includes a renaissance which is free and not extremist in accordance with the framework of Islam." Fahs claimed that Iran's attitude since the beginning has posed an obstacle to the reformation in Syria. Moreover, Fahs also criticized Hezbollah's stance with the Bashar Assad regime: "They [Hezbollah] don't want to be involved in dialogue with the other groups, however when things go bad for them in Syria, groups [referring to Iran] supporting them will leave them alone." Fahs also shared his concern about Iran's policy of using Shiite populations in the Middle East as a political tool.

Fahs, who lived in Iran between 1982 and 1985, did not limit his criticism to the Syrian civil war. "Iran is part of the problem in the region, even the problem itself is Iran, compared to Iran other actors that cause problems in the region come after Iran," Fahs said. However, Fahs explained that Iran can also be the main part of the solution as they are the main cause of the problem, adding that Iran does not take this responsibility and continues to stand with Assad. Furthermore, he also said that the main reason behind extremism and radical terrorist groups in Syria and Iraq are sectarian politics and the lack of respect to diversities. Fahs said that resolutions to the problem in the region require cooperation and embracing social diversity and added extremist groups can only be crushed by cooperation between the countries in the region.

Meanwhile, France hosted Iraqi President Fouad Massoum and called on the international community to unite against the Islamic State of Iraq and al-Sham (ISIS) and Iran was also invited to the conference to take part against the growing ISIS threat. However, Iran rejected joining the coalition against ISIS that consists of other powers including many Arab and Western countries. Supreme Leader Ayatollah Ali Khamenei, on Iranian television, indicated that they refused to join the coalition against ISIS.

Fahd is not alone with his idea of cooperation in the region against conflict, extremism and terrorism. Another offer came from Lebanon to end the political turmoil and extremism in the region. The Lebanese Progressive Socialist Party leader Walid Jumblatt said, "Turkey and Iran need to join Arab League for constructing a common policy against counterterrorism in the region." Jumblatt also claimed that the Arab League's mission needs to be redefined, adding that it will be strengthened with the participation of the two strong countries of Iran and Turkey in their fight against terrorism.
Last Update: Sep 17, 2014 1:58 am
RELATED TOPICS