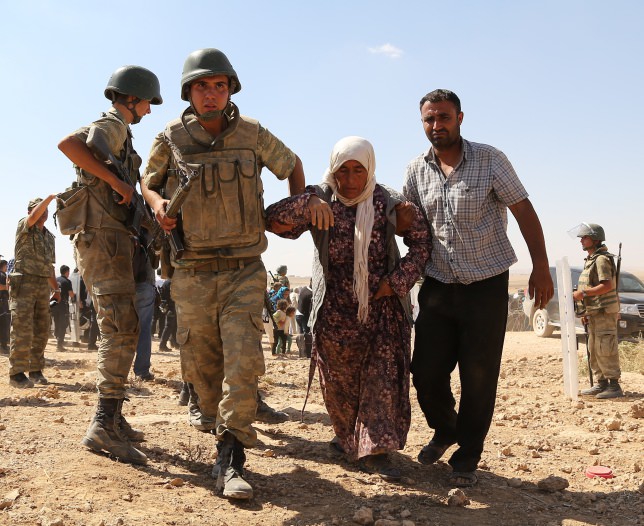 by Daily Sabah Sep 19, 2014 12:00 am
Syrians who fled clashes between the self-proclaimed Islamic State of Iraq and al-Sham (ISIS) and the Democratic Union Party (PYD) passed the border into Turkey. A group consisting of approximately 4,000 Syrian Kurds passed the Syrian-Turkish border after a waiting period on Thursday.

PM Davutoğlu stated on Thursday that Turkish aid continues regardless of ethnicity, religion or language, while main priority for Turkey is to help the immigrants at the border or within Syrian borders.

Following the advance of the ISIS militants gunshots were heard from the border, Syrians were unblocked from entering into Turkey.

ISIS fighters have captured 16 Kurdish villages over the past 24 hours in northern Syria near the Turkish border, prompting civilians to flee their homes.

The refugees who flooded the border caused congestion in the area, giving Turkish soldiers a hard time.

While Turkish officials stepped up measures to prevent the refugees to illegally cross the border, it was reported that they were provided with food supplies via some officers while their wait continued.

Turkish soldiers that patrolled the area throughout the night reportedly fired rounds in the air to keep the refuges away from the border. The refugees reportedly stepped back upon hearing the gunshots.


Some of the children, the elderly and women who fled the clashes were permitted to cross in Turkish territory, according to the reports.

Deputy Prime Minister Numan Kurtulmuş, speaking to Turkish news channel stated that 100, 000 more Syrians are estimated to refuge in Turkey as ISIS is about 7-8 kilometers away from the border.