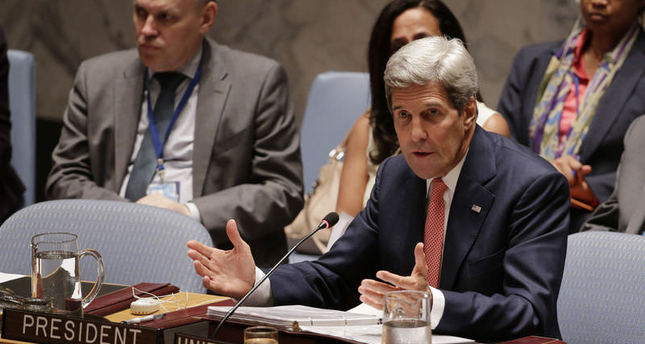 by Sep 20, 2014 12:00 am
U.S. Secretary of State John Kerry said on Friday that Iran had a role to play in a global coalition to tackle ISIS militants who have seized swaths of Iraq and Syria and proclaimed a caliphate in the heart of the Middle East.

"The coalition required to eliminate ISIS is not only, or even primarily, military in nature," Kerry told a United Nations Security Council meeting on Iraq.

"It must be comprehensive and include close collaboration across multiple lines of effort. It's about taking out an entire network, decimating and discrediting a militant cult masquerading as a religious movement," he said. "There is a role for nearly every country in the world to play, including Iran."

The United States, president of the U.N. Security Council for September, called the meeting on Iraq as it builds an international military, political and financial coalition to defeat ISIS.

Iran's supreme leader, Ayatollah Ali Khamenei, this week said he had rejected an offer by Washington for talks on fighting ISIS. Iran is the principal ally of ISIS' main foes in both Iraq and Syria.

U.S. President Barack Obama said on Wednesday that so far 40 nations had pledged to help. French jets struck a suspected ISIS target in Iraq for the first time on Friday, joining a U.S. bombing campaign that started a month ago.

"In 2003 acting against Iraq was something that divided this council, in 2014 acting for Iraq and against the Daesh terrorists is a duty for all of us," French Foreign Minister Laurent Fabius told the U.N. Security Council, referring to French opposition to a 2003 U.S.-led invasion of Iraq.

Daesh is an Arabic acronym for the group that now calls itself ISIS.

The U.N. Security Council adopted a statement on Thursday urging "the international community, in accordance with international law, to further strengthen and expand support for the government of Iraq as it fights ISIS and associated armed groups."