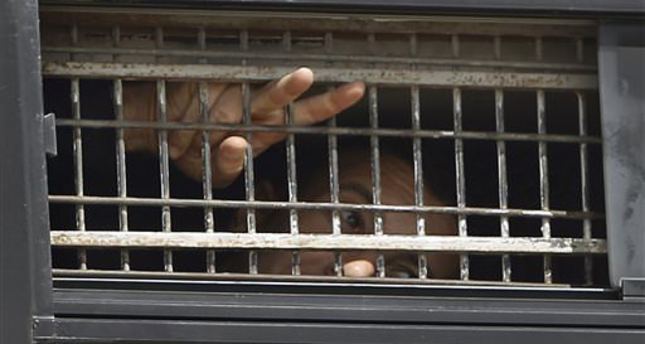 by AA Sep 21, 2014 12:00 am
Around 60 Palestinian prisoners who were released in 2011 as part of a swap deal with Israel but recaptured earlier this year by the latter plan to stage a hunger strike for a day to press for their release, a Palestinian NGO said Sunday.

The prisoners were part of the Gilad Shalit swap deal, but they were arrested yet again by Israel amid a wide-ranging crackdown in which Israeli forces detained hundreds of West Bank Palestinians following the abduction and murder of three Jewish settlers in mid-June, the Palestinian Prisoners Society said in a statement.

The society said that the prisoners would stage the hunger strike on Tuesday, noting that they called on a Palestinian delegation that would conduct indirect talks with Israel on a permanent Gaza cease-fire in Cairo on Wednesday to put their case on the negotiating table.

It added that some of the family members of the prisoners would stage a hunger strike at the office of the International Committee of the Red Cross in central West Bank in solidarity with their detained relatives.

On October 11, 2011, Israel released 1,027 Palestinian prisoners in an Egypt-mediated deal aiming to secure the release of Shalit, an Israeli soldier who was kidnapped by Palestinian faction Hamas in 2006.

Egypt would host indirect talks between the Palestinians and Israel on Wednesday on a permanent cease-fire in the Gaza Strip, a senior Egyptian official told Anadolu Agency on Saturday.

The Palestinians and the Israelis signed an initial cease-fire deal in Cairo on August 26 to bring to an end Israel's 51-day-long offensive on the Palestinian enclave, which left 2,150 Palestinians dead and more than 11,000 others injured.
Last Update: Sep 22, 2014 8:58 am
RELATED TOPICS