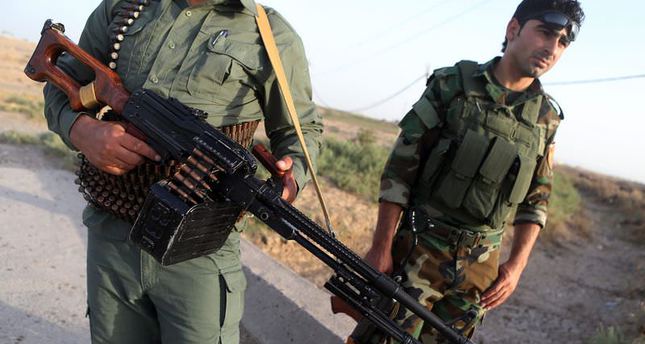 After advances by ISIS militants in the predominantly Kurdish areas of northern Syria, Kurdish armed factions claimed they have prevented ISIS from seizing the cities entirely in continued heavy clashes

Syrian Kurdish fighters have halted an advance by the Islamic State of Iraq and al-Sham to the east of a predominantly Kurdish town near the border with Turkey, a spokesman for the main armed Kurdish group said. "Fierce clashes are still under way but the ISIS advance to the east of Kobani was halted last night [early Monday morning]," Redur Xelil, spokesman for the main Kurdish armed group, the YPG, told Reuters via Skype. He said the eastern front was the scene of the fiercest fighting in the offensive launched by ISIS last Tuesday on Kobani, also known in Arabic as Ayn al-Arab. More than 100,000 Syrian Kurds, driven by fear of ISIS, have fled its advance, many crossing the border into Turkey. The Syrian Observatory for Human Rights, which tracks the violence in the Syrian war, said ISIS militants had made no significant advance in the last 24 hours.

Xelil said hundreds had crossed from Turkey again to help repel the current offensive. "There have been no reinforcements apart from some Kurdish youths from Turkey," he said.

While ISIS continues attacking Kurdish villages, the U.S. is looking to take action with President Barack Obama receiving authorization to conduct airstrikes against the militants in Syria and to arm the "moderate" rebels. Many European countries, including the U.K. and France, have already accepted being a part of the coalition as well as the Arab countries while Australia have also decided to take part. As part of the efforts to eradicate ISIS, U.S. Secretary of State John Kerry emerged from talks Sunday with Iranian Foreign Minister Mohamad Javad Zarif, saying Washington was intent on advancing negotiations focused on reducing Iran's atomic activities in exchange for an end to nuclear-related sanctions. The official said Kerry and Zarif also discussed "the threat posed by ISIS." Iran and the U.S. share a common enemy in ISIS, but a deep-seeded lack of trust has so far kept the longtime foes from publicly joining hands in a coalition to defeat the militants. However, former U.S. defense secretary Leon Panetta said "the rise of ISIS can be partly blamed on President Obama's failure to arm moderate Syrian rebels far earlier. "I think the president's concern, and I understand it, was that he had a fear that if we started providing weapons, we wouldn't know where those weapons would wind up," said Panetta, defense secretary, when the U.S. pulled out of Iraq in 2011. Panetta cautioned that it would take "a long time" to defeat ISIS. "And I think the American people need to know it's going to take a long time," he added, describing Iraq's failure to stem the militant tide "a tragic story." Panetta admitted that he had not been confident that pulling U.S. forces out of Iraq in 2011 was the right thing to do. "No, I wasn't. I really thought that it was important for us to maintain a presence in Iraq," he said.