Turkey to be 'on frontlines' of anti-ISIS fight: Kerry 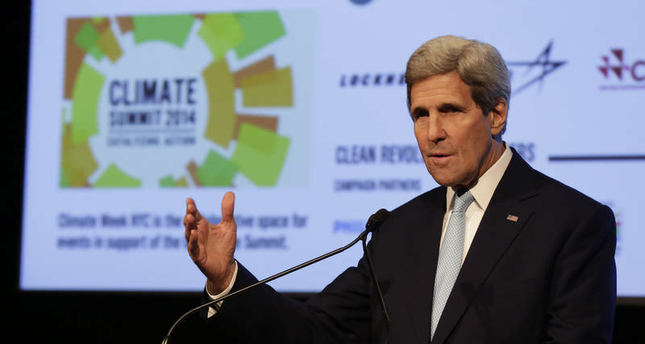 by Sep 23, 2014 12:00 am
US Secretary of State John Kerry said Tuesday that Turkey had pledged to take part in the US-led coalition against ISIS militants following the release of 49 Turkish hostages.

" Turkey is very much part of this coalition, and Turkey will be very engaged on the frontlines of this effort," Kerry told a global counter-terrorism forum after meeting with Turkish officials.

"Clearly Turkey had an initial challenge with respect to its hostages and that being resolved now Turkey is ready to conduct additional efforts along with the rest of us in order to guarantee success."

The forum, set up several years ago, aims to stem the spread of terror groups by cutting off funding, stemming the flow of foreign fighters and tacking the causes of violent extremism at its roots.

Speaking shortly after the United States and its Arab allies carried out air strikes against ISIS militants in Syria, Kerry said the New York talks could not be happening at a more important time.

"Every single country here today is a critical part of an effort to address a global terrorist threat that is more diverse than ever before," Kerry said.

The threat of the group had "resonance for every country in the room" and was "an organization that knows no bounds."

The ISIS militants were "cold-blooded killers masquerading as a religious movement" which had been "fed by illicit funding and a stream of foreign fighters that have regrettably come from many of the countries around this table, mine included," Kerry said.

Australian Foreign Minister Julie Bishop said it was estimated that around 160 Australians were fighting alongside the ISIS militants which have seized a swathe of territory in Iraq and Syria.

Turkish Foreign Minister Mevlüt Çavusoğlu said his country had deported more than a foreign fighters from almost 75 countries as it battles to halt the flow of extremists into Syria.

Ankara had also drawn up a watch-list with about 6,000 names on it.

He pledged his country's commitment to battling terrorism, but did not explicitly give details about any plans to join the US-led coalition.

Ankara has been accused by some analysts of helping to fuel the rise of IS jihadists with its support of Islamist rebels fighting Assad, but has vehemently denied backing their brutal campaign.

The jihadists now control swathes of Iraq and northern Syria and are now pushing on Kurdish-dominated areas in Syria, prompting a huge influx of refugees into Turkey.

A group of 46 Turks, including Turkey's consul, children and special forces soldiers who were abducted by IS jihadists from Turkey's consulate in the northern Iraqi city of Mosul in June, returned home Saturday after more than three months in captivity.