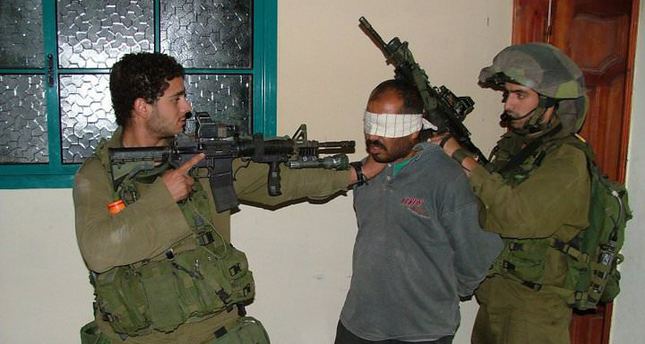 by Daily Sabah Sep 24, 2014 12:00 am
The Israeli army has admitted to killing two Palestinians, who were suspected of the killing of three Israeli teenage settlers. Lieutenant Colonel Peter Lerner said the suspects, Marwan Qawasmeh, 33, and Amer Abu Aisheh, 29, were killed in the occupied West Bank on Tuesday. "We opened fire, they returned fire and they were killed in the exchange," said Lerner. "We have visual confirmation for one. The second one, we have no visual confirmation, but the assumption is he was killed."

Although the Israeli army claimed that the two were affiliated to Hamas, Palestinian officials denied it. The two suspects who were killed were members of the Qawasmeh tribe, which is known for its attacks on Israeli settlers. Israeli forces began West Bank sweeps in June, rounding up hundreds of suspected Hamas members in house-to-house raids after the three Jewish seminary students went missing. Their bodies were found on June 30 in a field near Hebron. The killings set off a cycle of violence, with the suspected revenge murder by three Israelis of Palestinian Mohammed Abu Khudair, 16, in Jerusalem, igniting regular clashes between Israeli police and stone-throwing Palestinians. The arrests in the West Bank stoked hostilities with Hamas, which runs the Gaza Strip, where Israel launched an offensive on July 8, after a surge of rocket fire from the Palestinian enclave into Israeli territory. Gaza medical officials say 2,100 Palestinians, mostly civilians, were killed. Only 67 Israeli soldiers and six civilians in Israel were killed.
Last Update: Sep 24, 2014 9:48 am
RELATED TOPICS