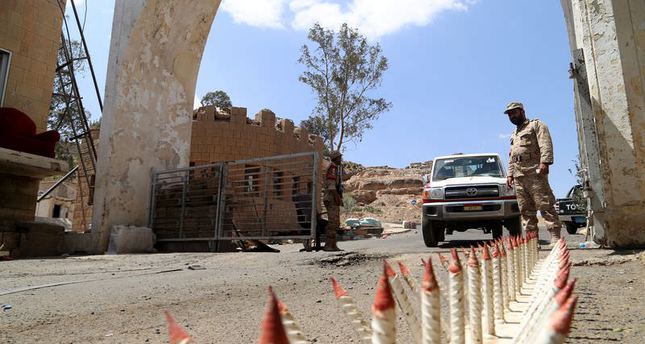 by AA Sep 25, 2014 12:00 am
A Wednesday statement allegedly issued by Al-Qaida called on Yemen's Sunnis to take up arms against the Shiite Houthi group, which recently wrested control of most state institutions in the capital Sanaa. "Sunnis, take up arms, take the path of struggle and know that your rights are only attained by the gun," Al-Qaida purportedly said in the statement.

Anadolu Agency has not been able to independently verify the statement, in which the terrorist group allegedly promises victory for Yemen's Sunnis "soon."

"Al-Qaida has already prepared itself to defend the Sunnis," the group purportedly says.

The group lashed out at the Houthi leadership, accusing it of destroying mosques and burning religious books. It also accused Houthi militants of carrying out a "Persian" plot in Yemen. AA could not obtain immediate comment from the Houthi movement on the alleged Al- Qaida statement. Yemen entered a fresh stage of turmoil earlier this week after state institutions in the capital fell under Houthi control. In recent weeks, thousands of Houthi supporters have been demonstrating in and around Sanaa to demand the dismissal of the government and a reduction of fuel prices. On Sunday, Yemeni President Abed Rabbuh Mansur Hadi signed a deal with the Houthi leadership aimed at ending the tension. The deal calls for the formation of a new government within three days; the appointment of a non-partisan prime minister; and the appointment of a Houthi adviser to the president. Shiite Houthi militants have taken over the offices of a Yemeni-French natural gas liquefaction company in Sanaa as the group tightened its grip on the capital on Wednesday, a source within the company said. "Houthi militants stormed the [company's] headquarters, searched employees' cars and restricted the entry of workers," the source, who works for the Yemen LNG Company, told Anadolu Agency. The Yemeni government has yet to comment on the development. Yemen LNG is responsible for running the Balhaf gas export terminal on the Gulf of Aden – the country's largest-ever industrial project. The terminal, built at a total cost of $4.5 billion (TL 10.1 billion) and which went online in 2009, exports LNG to Asia and Europe. French energy giant Total holds a 39.6-percent stake in the project.

Following days of deadly clashes with army troops, Houthi militants this week managed to seize most state institutions in Sanaa, including the cabinet and parliament buildings and Defense Ministry headquarters. On Sunday, President Abed Rabbuh Mansour Hadi – pressured by massive pro-Houthi demonstrations in Sanaa – signed a deal with the Houthi leadership aimed at ending the tension in and around the capital.

The deal calls for the formation of a new government within three days; the appointment of a nonpartisan prime minister; and the appointment of a Houthi adviser to the president. Houthi militants, who have erected checkpoints on main streets throughout Sanaa, now appear to be in full control of the capital. Yemen has been dogged by political turmoil since the 2012 ouster of longtime ruler Ali Abdullah Saleh.