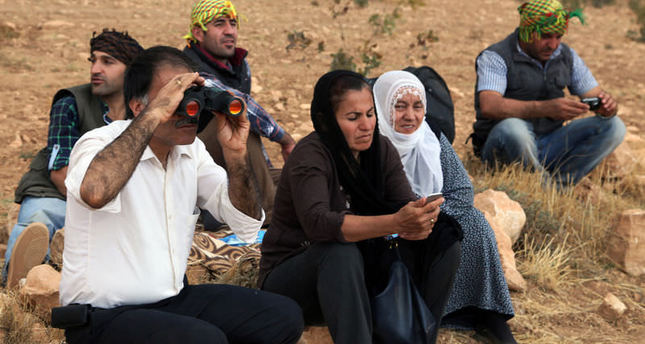 Hundreds of Syrian Kurdish refugees who found shelter from ISIS militants in the southeastern part of Turkey are returning home, despite the ongoing danger posed by the terrorist group.

There are still thousands of refugees crossing into Turkey from the border town of Ayn al-Arab in Syria --known as Kobani in Kurdish--, but some already in Turkey are returning home, despite the sound of gunfire coming from the Syrian lands. Some 140,000 refugees fled to Turkey last Friday, to escape the possible onslaught of the ISIS militants.

Kurdish fighters from the People's Protection Units, known as YPG, have been defending the town against the ISIS (the self-proclaimed Islamic State of Iraq and al-Sham) advance for more than a week. Some reports claim that the insurgent attacks are as close as 10 kilometers from central Kobani.

More than 1,000 Kurdish refugees crossed the Turkish border back to the neighboring Kobani on Wednesday, according to one eyewitness. One such refugee who wanted to go back to her home town --a woman in her fifties called Halise-- told the Turkish press agency AA on Wednesday night that they were miserable even though their relatives in Turkey were trying to shelter them.

"Even though there is life-threatening danger over there, we want to go back," she said, while waiting in front of border gate with her eight other family members.

"We are sick of living here," she added.

Their appeal was turned down by the Turkish army, which blocked the crossing for the rest of the day until Thursday morning.

Speaking by the border crossing on Thursday was mother-of-eight, Selma Shekhmuz. She told AA, "We were staying in the same place with nine other families.

"We don't have enough money to survive. Life is expensive here. We took shelter in Kobani two years ago leaving Damascus. We are scared but we do not have any other option. I have been here for the last six days."

Mahmoud Osman Ali, 77, said, "We came here with a mass panic. They told me ISIS has not reached Kobani. I am going back alone after I sent my daughter and her seven children to Gaziantep (a southeastern city in Turkey). I stayed here with my relatives."

Speaking in Brussels on Wednesday, pro-Kurdish Syrian Democratic Union Party co-chairman Salih Muslim warned that ISIS could carry out a massacre in Kobani within hours.

The Turkish province of Sürüç, which is only 10 kilometers from the Syrian border, has been transformed with the sudden and unprecedented refugee influx over the last week.

Although many of those fleeing the Syrian conflict are members of extended Kurdish families which straddle the border, many others have been forced into living in harsh conditions as they fill mosques, parks, and storehouses in the Turkish town.

In the meantime, thousands of Syrian refugees continue to pass through the barbed wire fences under security controls during the day.