Refugees in Yarmouk camp struggle to survive without food and water 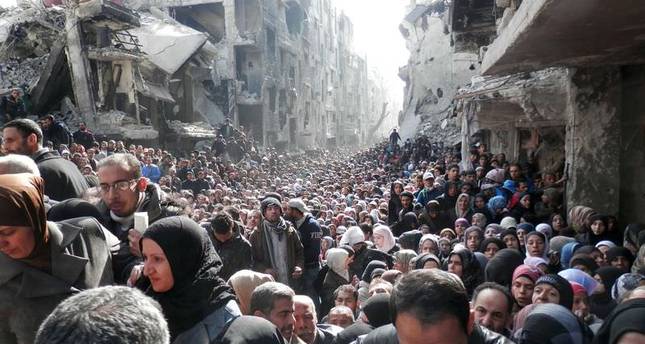 by Daily Sabah Sep 26, 2014 12:00 am
After facing severe food shortages, the lives of thousands of Palestinian refugees residing in Yarmouk camp in the south of Syria have been in jeopardy after Syrian government cut access to drinking water two months ago. The Yarmouk camp has been under seige from Assad regime forces and pro-regime militias since last September. Assad forces have cut the access to drinking water for at least 18 days," Rami es-Seyid, a local activist told Anadolu Agency. "Death is threatening the lives of 20,000 civilians due to the water shortage, with no water around Yarmouk," he said, stressing the worsening humanitarian situation in southern Syria due to the severe curtailment of access to humanitarian aid. Beyond the current water crisis, there is a growing fear that the shortage could cause the spread of contagious diseases with many Palestinian refugees living in poor and unsanitary living conditions. Palestinian refugees in Yarmouk camp have been struggling to survive, with drinking water only being provided by aid organizations.

The United Nations Relief and Works Agency (UNRWA) stated its deep concern over the Palestinian refugees in Syria as the resumption of food distribution to civilians inside Yarmouk has been disrupted by sporadic clashes in the area surrounded by the Assad regime's forces. Humanitarian access is critical in providing for residents who are suffering from severe food and water shortages inside Yarmouk. UNHRW stated that they were not able to provide aid to the area for four days between Sept. 14 and Sept. 17.

As the conflict in Syria rages on, food assistance has become the highest priority. The Syrian Food Assistance Operation run by the World Food Program (WFP), which is funded by contributions from governments around the world, said it is running out of money to provide food for almost 6 million Syrians in need of help. They claim they can no longer feed people until governments provide additional funds in the near future. "We have reached a critical point in our humanitarian response in Syria and in the neighboring countries," said Muhannad Hadi, WFP's Regional Emergency Coordinator for the Syrian crisis has stressed that the organization requires "$352 million (TL 794 million) for its operations as a whole until the end of the year."

The besieged Yarmouk camp is located on the outskirts of Damascus, home to the largest Palestinian refugee community in Syria. Before the Syrian war erupted in 2011, it accommodated more than 180,000 Palestinian refugees. However, due to severe security conditions, around 140,000 refugees have been internally displaced as a result of the war. The recent reports state that over 18,000 civilians trapped in the camp have been suffering from desperate humanitarian conditions, without access to basic human needs.