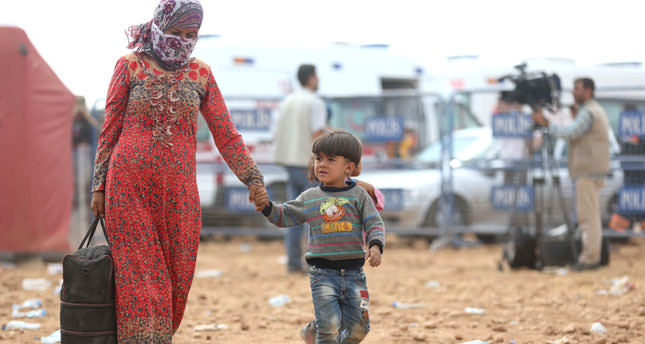 by Daily Sabah with Agencies Sep 29, 2014 12:00 am
With more than 160,000 Syrian Kurds in Turkey and more on the way, Turkey is mobilizing its resources to feed and house tired and devastated refugees in Suruç. Meanwhile, the U.S.-led coalition continues airstrikes against ISIS,with attacks over the weekend concentrating on regions in Syria close to the Turkish border.

The U.S.-led coalition has conducted several airstrikes against Islamic State of Iraq and al-Sham (ISIS) militants and some other al-Qaida-linked groups, such as al-Nusra Front, near the Turkish border. The attacks killed dozens of militants including some civilians, according to reports. Kobani, which was captured by ISIS militants, was one of the targets of the coalition. Hundreds of thousands of people had to leave Kobani and fled to Turkey after ISIS militants started exterminating the population. An ISIS building and two armed vehicles at the Kobani border crossing were destroyed. An ISIS-held airfield, an ISIS garrison and an ISIS training camp near ar-Raqqah were damaged," read a U.S. Central Command statement. According to the statement an ISIS vehicle and several buildings belonging to an ISIS garrison were also destroyed in al-Hasakah province in northeastern Syria. An ISIS command and control facility near the town of Manbij in the northern part of Aleppo was damaged, the statement described. Both the U.S. Air Force and Navy were involved in the strikes. In addition, Saudi Arabia, Jordan and the United Arab Emirates also participated in the strikes, according to the U.S. Central Command. In Iraq, three airstrikes in the southwest of Irbil destroyed four ISIS armed vehicles and destroyed an ISIS fighting position.

The strikes also killed the leader of al-Qaeda-linked Khorasan group, according to a twitter account. Yet, it has not been confirmed to be true or not. A U.S. official on Sept. 24 said the U.S. believed Mohsin al-Fadhli, a senior al-Qaida operative, had been killed in a strike a day earlier, but the Pentagon said several hours later that it was still investigating what had happened to him. In a message posted on Sept. 27, a jihadist offered condolences for the death of Kuwaiti-born Fadhli, otherwise known as Abu Asmaa al-Kuwati or Abu Asmaa al-Jazrawi, following the Sept. 23 airstrike, SITE reported. U.S. officials have described the Khorasan group as a network of seasoned al-Qaida fighters with battlefield experience mostly in Pakistan and Afghanistan now working in league with al-Qaida's Syrian affiliate, al-Nusra Front. Khorasan is a term for an area including parts of Pakistan and Afghanistan where al-Qaida's main council is believed to be in hiding. After the Sept. 23 strikes, U.S. officials said they were still assessing how badly the Khorasan group had been hit. Islamist militants on social media have said there were unconfirmed reports that the 33-year-old Fadhli had been killed. SITE did not name the jihadist who reported Fadhli's death but said he had trained under a close associate of al-Qaida leader Ayman al-Zawahri and had fought in Khorasan before traveling to Syria. A 2012 State Department notice offering a $7 million (TL 15.8 million) reward for information on Fadhli's whereabouts said he was an al-Qaida financier close to al-Qaida founder Osama bin Laden and among the few who knew in advance about the Sept. 11, 2001, attacks.

The airstrikes continued on Sunday, as coalition warplanes pounded the Tel Abyad oil refinery, which was seized by ISIS militants a few weeks ago.