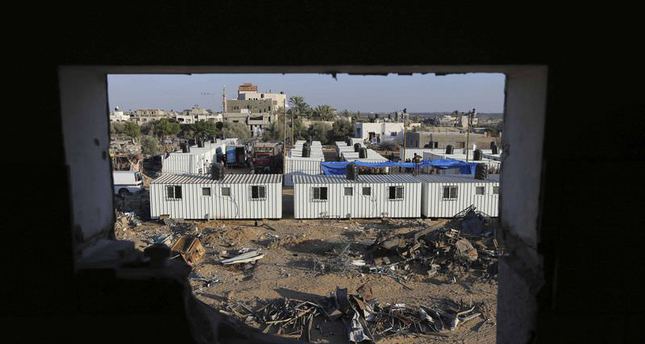 by AA Oct 01, 2014 12:00 am
Israel has allowed 450 heavy machines into the Gaza Strip for the first time since it imposed its cripplingblockade on the Palestinian enclave in 2007.

He said the machines would be allowed into the Gaza Strip as part of arrangements for rebuilding the territory, still reeling from 51days of fierce Israeli bombardments that ended in late August.

Mehanna, however, did not provide an exact date for the entry of the machines into Gaza.

Blockaded by Israel-by air, land and sea-since 2007, the Gaza Strip has seven border crossings linking it to the outside world.

Six of these crossings are controlled by Israel, while a seventh-the Rafah crossing-is controlled by Egypt, which keeps it tightly sealed for the most part.

Israel sealed four of its commercial crossings with Gaza in June 2007 after Palestinian resistance movement Hamas wrested control of the strip from the Ramallah-based Palestinian Authority.

As it currently stands, Israeli authorities allow the Kerem Shalom crossing-which links Gaza to both Israel and Egypt-to operate for commercial purposes.

The Gaza-Israel Erez crossing, meanwhile, is generally devoted to the movement of individuals between Gaza and the occupied West Bank.

On July 7, Israel launched a seven-week offensive against the Gaza Strip, killing more than 2,150 Palestinians in the process and injuring nearly 11,000 others.

The Israeli offensive, launched with the stated aim of halting rocket fire from Gaza, also destroyed thousands of homes across the Palestinian territory.

Over the course of the onslaught, at least 73 Israelis-68 soldiers and five civilians-were also killed, according to Israeli figures.

The Israeli offensive ended on August 26 with an indefinite cease-fire that was celebrated by Hamas as a strategic victory.