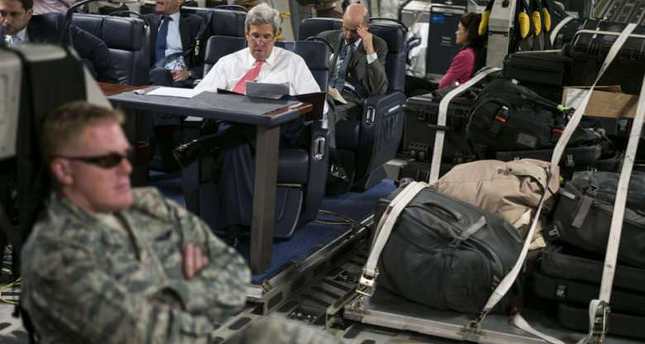 by Daily Sabah Oct 02, 2014 12:00 am
The U.S.-led coalition, organized to eradicate the Islamic State of Iraq and al-Sham (ISIS), has continued strikes on militants and buildings used by the group in Iraq and Syria. An Iraqi police chief said that U.S. warplanes pounded ISIS headquarters in Iraq's Kirkuk. The attack took place in the Havice region near Kirkuk and caused several casualties among ISIS ranks, Havice Police Chief Kazim Muhammad told the Anadolu Agency. U.S.-led forces also launched air strikes on ISIS fighters near the Turkish border since the militants were besieging a Kurdish town. Besides the U.S., British warplanes also carried out its first air raids against the group. Australian aircraft will join the U.S.-led coalition in air strikes against ISIS insurgents in Iraq in an initial support role, Prime Minister Tony Abbott said on Wednesday, ahead of a final decision to undertake bombing missions. Last month, Abbott sent 10 aircraft and some 600 personnel to the United Arab Emirates in preparation for joining the coalition and has since said Australian involvement in air strikes was likely to combat the "murderous death cult." "We have not yet made a final decision to commit our forces to combat, but Australian aircraft from today will start flying over Iraq in support of allied operations," Abbott told parliament. "Australian air strikes await final clearances from the Iraqi government and a further decision of our own," he added.

The Pentagon, appealing for patience, warned that there would be no quick and easy end to the fighting. No one should be lulled into a false sense of security by accurate air strikes," Pentagon spokesman Rear Admiral John Kirby, told reporters. "We will not, we cannot bomb them into obscurity," he said. A long-term effort will be needed to train and arm Syrian rebel forces and strengthen Iraq's army, he said.

He said, "Military action alone will not win this effort." The U.S. Marine Corps plans to deploy 2,300 troops to the Middle East for a new "special purpose marine air ground task force" designed to quickly respond to crises in the volatile region, Kirby added.

The idea for the task force originated before the U.S. air strikes against ISIS and is not related "to the ongoing operations in Iraq," he said.

It was reported that U.S. President Barack Obama held a meeting with his top national security advisers to discuss their strategy for countering ISIS. "The president is meeting with his National Security Council to discuss our comprehensive strategy to counter the threat posed by ISIS in Iraq and Syria," a White House official said.