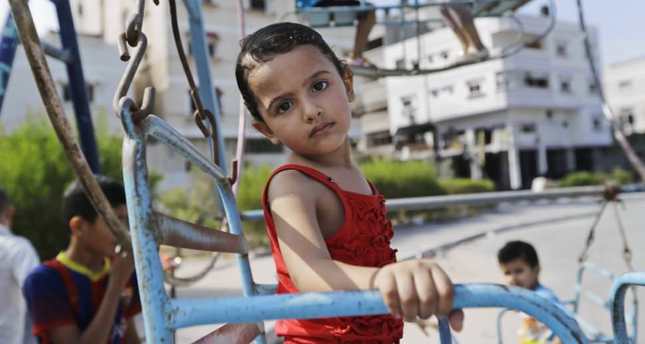 Palestinians are still suffering from devastating economic conditions after Gaza war, the Gaza Labor Union recently said that the number of Gaza's unemployed has raisen, along with its poverty rate

After devastating impact of Gaza war on Palestinians, the Muslim Eid al-Adha holiday has been celebrating without joy in Palestine, as many people has long been suffered from poor economic conditions. The Gaza Labor Union recently said that 30,000 Gazans lost their jobs as a direct result of the recent conflict, which only ended when Israel and Palestinian resistance factions signed an August 26 cease-fire agreement. The number of Gaza's unemployed has raised to some 200,000, upon whom 900,000 other people depend. As the impact of the Gaza war on daily lives continues, The Palestinian Ministry of Social Affairs recently warned of an imminent rise in Gaza's poverty rate. The ministry said that the number of poor families in Gaza could double – from 60,000 to 120,000 – as an immediate result of Israel's onslaught.

The prospect of a merry feast brings Mahmoud Shetat, a Palestinian child who lives in the devastated Gaza Strip, little joy. Shetat's father lost his job at a Gaza factory that was totally destroyed by Israel's recent onslaught on the embattled coastal enclave. This means that 11-year-old Shetat will not have the money to buy the nice pair of pants and shirt he saw in a local shop a few days ago.

"I couldn't wait for Eid to come so I could buy new clothes," Shetat said. "We haven't bought clothes all year because my father couldn't afford it." Shetat is sorry he can't buy new clothes like some of his friends and relatives, saying he doesn't even plan to leave his house for the four-day feast.

Former shop owner Khaled Jamal is in no better shape. This father of three, too, can't meet his children's holiday needs. "The joy of the Eid al-Adha is rooted in one's ability to buy new clothes and spend quality time with the kids outside," Jamal told Anadolu Agency (AA). He said the war had left a trail of suffering for the Gaza Strip's roughly 1.9 million residents.

"I used to make my children happy during eid," Jamal said. "But my current financial situation prevents me from buying them what they want," he continued.

For the first time in years, Khetam al-Jamali won't be able to bake Eid cookies for her children due to Gaza's deteriorating economic conditions. The mother of five said her husband's meager salary was not enough for her to bake cookies or buy new clothes for her children.

"My husband has not been paid for five months now," al-Jamali, whose husband was employed by Gaza's former Hamas government, told AA. She said the small amount her husband gets every month was barely enough to pay debts and put food on the table.

Some 45,000 civil servants employed by the Hamas-run Gaza government stopped receiving salaries after Hamas relinquished power in Gaza to a new Palestinian unity government drawn up in May.

The new government had earlier refused to include Hamas-hired civil servants on its payroll. According to trader Essam al-Sawafiri, the local market is suffering an "unprecedented recession." The owner of a clothing shop, al-Sawafiri says the economic situation is getting worse day by day.

"There is no demand for clothes," he complained. "We are suffering from a recession that has paralyzed some 90 percent of the strip's economic activity." He attributes the recession to Israel's seven-year-old blockade of the coastal territory and the new unity government's failure to pay Gaza's Hamas-employed civil servants.

According to Palestinian figures, Israel's recent war on the strip destroyed 500 facilities across the territory, costing some $3 billion (TL6.8 billion). Ever since Hamas swept Palestinian legislative polls in 2006, Israel has imposed a tight land-and-sea blockade on the Gaza Strip. Israel has tightened the blockade further after Hamas wrested control of the enclave from rival Palestinian faction Fatah one year later.