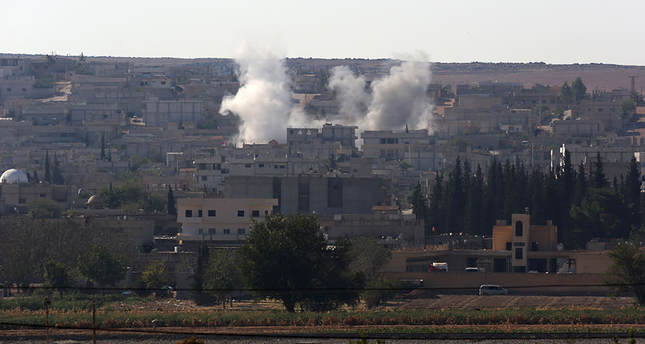 by Daily Sabah with Agencies Oct 05, 2014 12:00 am
The self-proclaimed Islamic State of Iraq and Sham (ISIS) militants began their heaviest attack on Kobani on Sunday since they besieged the town.

Explosions can easily be seen and heard from the Turkish side of the border, and white fumes arise from various points of the town.

Heavy artillery, tanks, mortars and anti-aircraft guns are being used in clashes, while light weaponry explosions can also be heard from the Turkish side of the border, which is perceived as the street battle for the town had begun.

Early on Sunday a mortar round landed around 500 metres (550 yards) inside Turkish territory close to an army base at Mürşitpınar, while another shell hit a civilian home yard in Suruç, Şanlıurfa, wounding 5 people including 2 children.

Governorate of southern Şanlıurfa province decided mid-Sunday to evacuate two villages named Küçükkendirci and Büyükkendirci, close to Syrian border, along with Mürşitpınar just across the border from Kobani, as shells continue to land on Turkish soil. Traffic for Mürşitpınar village is also blocked by security forces. Education in the schools around the area were also suspended until further notice.

Many TV channels stationed in the area to give live coverage of the clashes were repositioned away from the Syrian border due to security reasons.

On Saturday a Turkish Special Forces officer was wounded after being hit by shrapnel from a stray shell apparently fired by ISIS militants, according to media and local sources.

Turkish Armed Forces reportedly fired artillery rounds to the positions where the shells are fired, Turkish jets are also reported armed and ready to take off.

Kurdish forces battled overnight with ISIS militants trying to seize a hill overlooking the Syrian border town with Turkey as U.S.-led coalition warplanes carried out raids on the militants, a Kurdish official and a monitoring group said on Sunday.

A translator with the Kurdish Democratic Union Party (PYD) inside Kobani said the ISIS militants were hitting it with tank and mortar fire as they tried to seize Mistanour hill, a landmark whose capture would give them easy access to the town.

Kurdish forces had managed to stop ISIS capturing the hill, Parwer Mohammed Ali told Reuters. "Overnight there were new airstrikes. They struck three or four times in the vicinity Mistanour hill," he added.

ISIS tanks and armored vehicles were spotted on hills overlooking the town on Sunday.

ISIS, a radical offshoot of al Qaeda, launched a new offensive to capture Kobani, a Kurdish town, two weeks ago as they try consolidating their hold on a stretch of territory across northern Syria and Iraq.

U.S-led air raids on the ISIS in Syria have done little to blunt its advance on Kobani, also known as Ayn al-Arab, and the violence has driven about some 180,000 Kurds into Turkey.

The Britain-based Syrian Observatory for Human Rights, which monitors the three-year-old Syrian war, said the ISIS has managed to capture the southern side of Mistanour hill, the furthest away from the town.

At least 11 Kurdish fighters and 16 ISIS militants were killed in the overnight clashes, it said.

Ocalan Iso, deputy commander of the Kurdish forces defending Kobani, said the clashes had focused on the hill, which lies to the south east. ISIS militants are now within a kilometre of Kobani, he said by telephone.