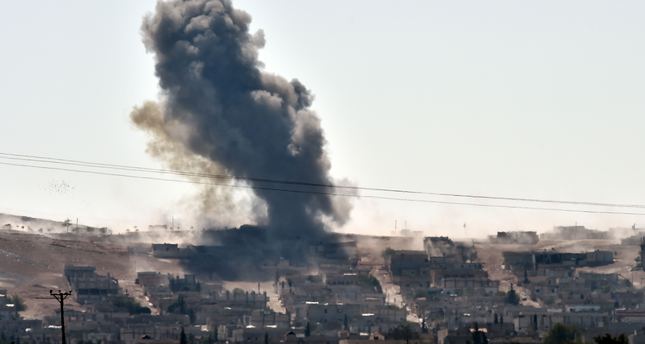 by Oct 06, 2014 12:00 am
Kurdish fighters battling ISIS militants for the Syrian town of Kobane employed a new tactic when a female suicide bomber blew herself up in an attack claimed to have killed dozens of militants. The young woman, a full-time fighter with the Syria-based Kurdish rebel group the People's Protection Units (YPG), killed herself in the attack on Sunday, Kurdish sources said. Her name in Kurdish was Dilar Gencxemis but she went under the nom-de-guerre of Arin Mirkan, the YPG said in a statement. She was from the Syrian town of Afrin in the Aleppo province of northern Syria, just south of the Turkish border.

With Kurdish fighters under increasing pressure from the ISIS militants seeking to seize Kobane, this is the first time a suicide bomber has been used by Kurdish forces in the conflict. "I don't know her exact age but she was above 20. She was a fighter from the YPG," said Mustafa Bali, a Kurdish official in Kobane told in the Turkish border town of Suruc.

"She threw many grenades at ISIS insurgents. After that, she blew herself up," he said, adding that dozens of ISIS fighters were killed in her assault.
The Britain-based Britain-based group the Syrian Observatory for Human Rights, which has a wide network of sources inside Syria, also confirmed the attack by the female suicide bomber.

It was not possible to independently confirm the circumstances of her death or how many ISIS fighters had been killed in her action.
The outlawed Kurdistan Workers Party (PKK), which has battled Turkish forces for 30 years in an insurgency for self-rule and is linked to the YPG, has used female suicide bombers for attacks inside Turkey in the past. ISIS fighters on Monday put up flags on the eastern edge of Kobane, with the fight for the city entering a decisive phase.

The YPG issued a statement carried by the pro-Kurdish Firat news agency, extolling Mirkan's bravery and indicating more suicide attacks were possible. "She killed dozens of gang members and demonstrated the YPG fighters' determined resistance," it said. "If necessary, all YPG fighters will follow her example, and the gangs will not be allowed to achieve their aim of taking Kobane," it added.

Her act struck a chord with Kurds and others supporting the opposition to ISIS in Kobane, with #ArinMirkan becoming a popular hashtag on Twitter.
Asked if the suicide bombings would continue, Idris Nahsen, a Kurdish official in Kobane, said: "I don't know. It is related to the situation, we don't have this strategy."

Defying air strikes by the US-led coalition, ISIS militants have advanced to positions just a few hundred metres from Kobane and just a few kilometres from the Turkish borders.

"If needed, all of our fighters will be comrade Arin and shall not allow the mercenaries to achieve their wishes," the YPG said. Kurds in neighbouring Turkey anxiously watching the fight for Kobane -- known as Ain al-Arab in Arabic -- also praised her actions. "The woman blew herself up for me, for the Kurds and for Kobane," 26-year-old Ahmed Mustafa said.

"There are so many people who can explode themselves for Kobane. Kobane is the centre of Syrian Kurds," said Mustafa, one of the estimated 186,000 people from the Kobane region who fled the fighting into neighbouring Turkey. Turkish Kurd Mehmet, 26, said that "Arin sacrificed her life for all Kurds."

"We cannot separate Kobane from Turkey. Suicide bombings will spread over Turkey if militants get full control of Kobane because those on the other side of the border are our brothers," he said.

Women traditionally form a major part of Kurdish fighting forces, such as the peshmerga force of the Kurdistan region of northern Iraq.
Some reports this week suggested that a 19-year-old female YPG fighter named Ceylan Ozalp killed herself with her last bullet rather than fall into the hands of ISIS. However the latest reports in Turkish media have said she could still be alive.