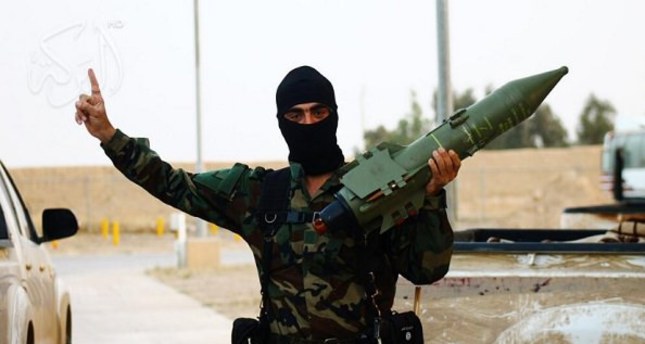 by Yusuf Selman İnanç Oct 08, 2014 12:00 am
According to a report released by Conflict Armament Research (CAR) last week revealed that Islamic State of Iraq and al-Sham (ISIS) militants use various weapons manufactured by several countries including the U.S., China, Russia, the former Soviet Union, and Serbia. The report, "Dispatch from the Field: Islamic State Ammunition in Iraq and Syria," analyzed small-caliber ammunition recovered by ISIS in Iraq and Syria. CAR derived its findings from an array of field research, conducted in the Kurdish regions of the two countries. The investigators took the weapons seized from the militants during the battles with Kurdish fighters as samples. The team worked in Kobani and Serekane in Syria. Investigators cataloged more than 1,700 bullet cartridges by their country of origin and their date of manufacture. The report says most of the related arms appear to have been seized by ISIS from opposing forces – from national armies to foreign-backed rebel groups across Syria and Iraq.

"The lesson learned here is that the defense and security forces that have been supplied ammunition by external nations really don't have the capacity to maintain custody of that ammunition," James Bevan, director of the European Union-funded CAR, told The New York Times.

The report revealed that ISIS militants mostly use American, Russian and Chinese weapons while these countries strictly oppose the existence of the group in the region. The report notes that almost 20 percent of the cartridges cataloged could be traced to U.S. manufacturers. The report also pointed out that ISIS uses the ammunition manufactured in Russia under the Wolf brand and distributed by the U.S. to allied states in the Middle East.

The report gives the total number of cartridges documented by country of manufacture. According to the report, ISIS has 445 Chinese made, 338 Soviet made, 323 American made, and 154 Russian made cartridges. CAR recovered most of the 1970s-80s-dated ammunition in the sample from ISIS forces in Syria. Ammunition from this period was of predominantly Chinese and Soviet manufacture. By contrast, the sample of ammunition recovered in Iraq is mainly American manufactured, and comprises 5.56 x 45 mm cartridges, which are used in the U.S.-supplied M16 and M4 assault rifles of the Iraqi defense and security forces.

The report uncovers that the weapons used by ISIS have mostly been manufactured in its enemies' factories. Yet, this does not reveal how the weapons have fallen into the hands of the militants, and if it is related to the armament of other Western-backed rebels since the ammunition and weapons can easily be handed over to another group at the end of clashes.