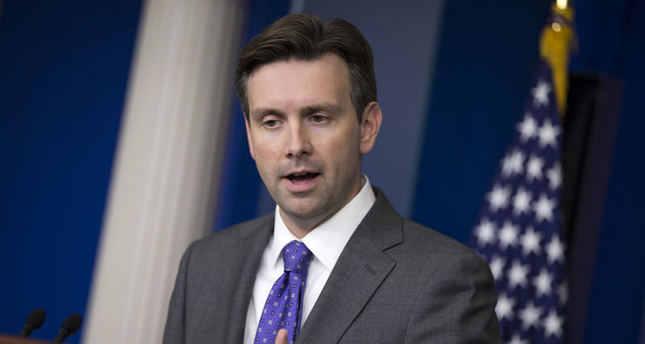 by Oct 08, 2014 12:00 am
The White House denied Wednesday it was planning to create a safe haven along Turkey's border with Syria, after France backed the proposal and the US and British top diplomats said the idea was worth examining.

"It's not something that is under consideration right now," White House spokesman Josh Earnest told reporters.

Earlier, Secretary of State John Kerry said "the buffer zone is an idea that's out there, it's worth examining, it's worth looking at very, very closely."
Turkey has been calling for a buffer zone to protect its border, and also provide some security for Syrian Kurds fleeing the onslaught by ISIS militants, and won backing from France.

French President Francois Hollande "gave his support to the idea... of creating a buffer zone between Syria and Turkey to host and protect displaced people," the French presidency said in a statement.

"We'd have to explore with our other allies and partners what is meant by a buffer zone, how such a concept would work. But I certainly wouldn't want to rule it out at this stage," he added.

Such a move would mark a significant shift in American military engagement in the region, but State Department spokeswoman Jen Psaki also downplayed any suggestion that the creation of a buffer was imminent, highlighting the many challenges it would post.

Washington was happy to discuss it with its allies amid "an active debate .... because Turkey and other countries have renewed their interest in having a discussion about this," Psaki said.

"While we're not considering the implementation of this at this time, it doesn't mean we are not continuing discussions about a range of options, including proposals and ideas," she told reporters.

She denied that the Obama administration was sending a mixed message, saying: "We've never ruled it out. We're open to hearing from our partners, and that's what I expect we'll continue to do."

During the past three years of the civil war to oust Syrian President Bashar al-Assad, the Obama administration has consistently refused to establish a safe haven to protect fleeing Syrians, saying a no-fly zone would be too complicated to set up and patrol.

Retired General John Allen, who is in charge of building a US-led coalition to fight IS, is due to hold talks in Turkey with US pointman in Iraq Brett McGurk on Thursday and Friday amid battles for the Kurdish border town of Kobane in Syria.

Kerry referred to the millions of refugees who have fled across the Syrian border.

"This should not be a problem which is thrust onto Turkey, Lebanon, Jordan, where they bear an incredible burden," Kerry said.

"If Syrian citizens can return to Syria and be protected in an area across the border, there's a lot that would commend that," the top US diplomat added.

"But at the same time, you'd have to guarantee safety, that there wouldn't be attacks by the government."