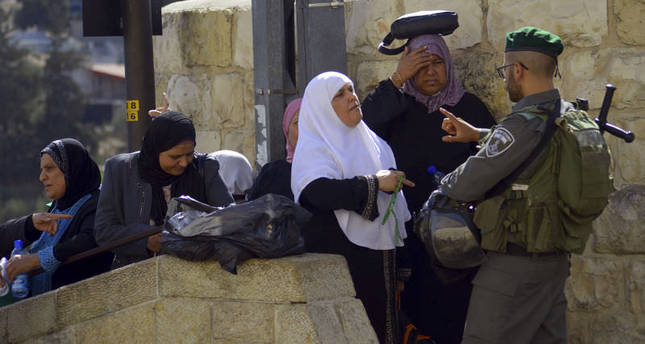 by AA Oct 09, 2014 12:00 am
Turkey condemned the storming of the holy Al-Aqsa Mosque by Israeli police on Wednesday that resulted in injuries to Palestinian worshippers and to three Israeli police agents.

The Israeli Tourist authority had, earlier in the week, relaxed restrictions for Non-Muslims to visit the mosque. On Wednesday, as some of these visitors tried to enter the building, they clashed with Palestinians inside. The Jewish visitors intended to celebrate the beginning of the nine-day Jewish holiday Sukkot, also known as the "Harvest Feast."

Releasing a statement on Thursday, Turkey's Foreign Ministry raised concerns that Israel's provocative attitude may spark another wave of unrest and tension.

The ministry also called on Israel to stop violating Muslims' right to pray.

There have been a number of episodes of violence In recent months, as groups of Jews, often accompanied by Israeli security forces, have sought to enter the Al-Aqsa complex.

In September 2000, a visit to Al-Aqsa by controversial Israeli leader Ariel Sharon sparked what later became known as the "Second Intifada," a popular uprising against the Israeli occupation in which thousands of Palestinians were killed.