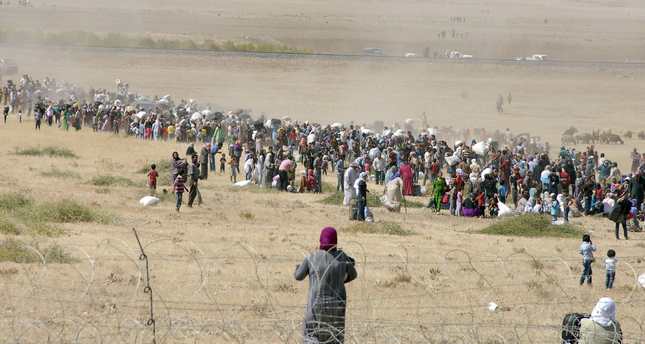 by Yusuf Selman İnanç Oct 09, 2014 12:00 am
The U.N. envoy tasked with finding a peaceful resolution to the crisis in Syria, Staffan de Mistura, claimed that the Islamic State of Iraq and al-Sham (ISIS), which is on the verge of capturing the Kurdish town of Kobani, may exterminate the population and urged the international community to act to prevent the "rape and massacre" since the U.S.-led anti-ISIS coalition has thus far failed to stop the group. De Mistura said on Tuesday that Kobani faced horrific violence from ISIS. "The world has seen what happens when a city is overtaken by the terrorist group: massacres, humanitarian tragedies, rapes, horrific violence," he said, adding: "The international community cannot sustain another city falling under ISIS. What is needed now is concrete action. The world – all of us – will regret deeply if ISIS is able to take over. We need to act now."

The town's population was 45,000, according to the 2004 census, but exceeds 100,000 when the surrounding villages are also included. Local sources have said that more than 160,000 people fled to Turkey, and there are a few thousand Kurdish fighters who are struggling to combat the ISIS militants. Contrary to de Mistura's claims, there is almost no civilian population in the town, according to reports coming from the region.

Local sources said the Kurdish fighters are suffering from ineffective U.S.-led coalition airstrikes since the attacks do not repel the militants. The Pentagon said coalition strikes near Kobani on Monday and Tuesday had damaged or destroyed several armed vehicles, anti-aircraft artillery, a tank and a unit. But they failed to stop ISIS fighters from penetrating into eastern neighborhoods of the town on Monday, sparking fierce street battles with the Kurdish defenders. The Syrian Observatory for Human Rights, a Britain-based monitoring group, said Kurdish resistance fighters had succeeded in forcing the militants to retreat in some areas they had entered.

Despite the failure, the U.S. is calling on the international community to broaden the military operation against ISIS to save Kobani and called the fresh airstrikes "useful." U.S. State Department spokeswoman Jen Psaki said Tuesday that airstrikes were helping fight off the ultra-radical militants who are laying siege to the town. "Well, we're assisting them by undertaking the airstrikes that we have conducted over the past several days. And certainly we've seen that that has been useful, not only there but in Iraq and other places where we've done that," she said.

ISIS militants started attacking the town three weeks ago, and since that time armed Kurdish factions have been struggling alone to defend the town. However, ISIS militants have already seized villages and smaller towns around Kobani.
Last Update: Oct 09, 2014 2:10 am
RELATED TOPICS