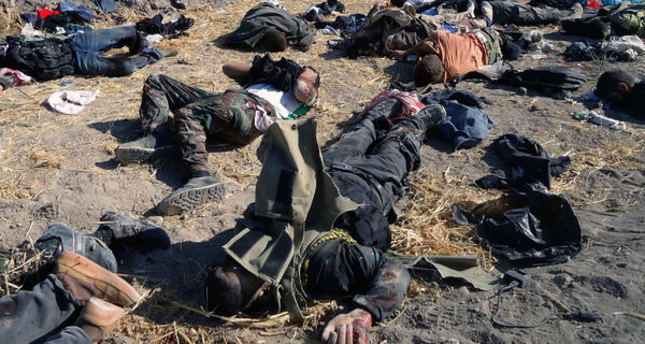 by Yusuf Selman İnanç Oct 11, 2014 12:00 am
While the world is focused on the activities of Islamic State of Iraq and al-Sham (ISIS) militants in Iraq and northern Syria, Syrian regime forces continue to pursue their war on rebels and launch airstrikes on rebel-held areas regardless to the identity of the victims. Yet the regime of Syrian President Bashar al-Assad is not in the cross-hairs despite ongoing civilian deaths. Two weeks ago, in a statement made by the U.S. administration, the U.S.-led anti-ISIS coalition, which has declared the eradication of ISIS from the region as its ultimate target, made it clear that it has no aim of toppling the Syrian regime. On the contrary, according to the mainstream Syrian opposition, the coalition members' airstrikes are opening a space for the regime to intensify its attacks.

The local sources underscored that the air raids launched by the regime, which also include dropping barrel bombs, have killed dozens of Syrians since the anti-ISIS coalition started pounding ISIS in Syria. Faris Samir from Harem in the northern Syrian governorate of Idlib told the Guardian. "Syrian aircraft used to shell us two or three times a week, but now they target us every day thanks to the coalition forces. We are losing martyrs and many are injured but no one pays any attention. Now, the Syrian army is taking areas bombed by the coalition forces after the Islamic factions withdraw. I have to say that the coalition military campaign is in the interest of the Syrian regime and against the Syrian people," said Alaa Ibrahim, a Syrian commentator. "In no case has a coalition airstrike helped government forces. But there has not been any hindrance to government attacks on rebels either," said Emile Hokayem of the International Institute of Strategic Studies speaking to the Guardian.

"It is undeniable that Assad benefits in many ways from the anti-ISIS campaign. His own attacks and atrocities have received less attention. He cultivates ambiguity about coordination with the international coalition and benefits from the disarray and frustration among rebel forces and their sympathizers; the defection of some rebel units to ISIS helps him portray all rebels as extremists. Obama said a few weeks ago that the U.S. had no strategy yet to fight ISIS. It seems there is still no strategy because the Syria component is missing. The U.S. has adopted a narrow, counter-terrorism approach that is flawed and counterproductive and has time after time ignored and denigrated its potential Syrian allies," Hokayem said.

A Free Syrian Army member told Daily Sabah, "The coalition suffers from the lack of cooperation on the ground. Their officials also voiced this deficiency. We are saying that we can help you against ISIS since the group turns its weapons on us on every occasion. However, we also demand help against the regime that has killed hundreds of thousands of people in this country since the war started." He added, "Our people do not believe in the sincerity of this coalition and cannot understand how ISIS became the main target while the regime was destroying the country."

Local sources also underscored the fact that coalition attacks on ISIS are not working since the group continues advancing in some areas or at least continues to hold their positions. For instance, coalition forces have conducted the most intense strikes on ISIS positions in Kobani over the past two days. Yet, ISIS still penetrated into three districts of Kobani on Thursday, the town's administration spokesman told Anadolu Agency (AA). The spokesman, Mahmud Bashar, said, "Our armed groups fought against the attacks of the terrorist organization, but a ground offensive led by the U.S. and NATO is required along with the airstrikes to completely remove ISIS from the town."

More than 10 people, including women and children, were killed on Friday and dozens of others injured in Syria's southwestern province of Daraa in barrel bomb attacks dropped by regime warplanes. The Syrian Revolution General Commission (SRGC) say Syrian fighter jets dropped bombs in the town of al-Hara in the countryside of Daraa. The opposition also said that people in opposition-controlled areas are fleeing after random attacks by the Assad regime. The Syrian air force also pounded a market in Arbin, a suburb of Damascus. The SRGC said more than 25 people died and the death toll is likely to increase as dozens have been badly wounded.

The regime does not only use conventional weapons but also chemical weapons. The Hague-based Organization for the Prohibition of Chemical Weapons (OPWC) says it has evidence of the use of chlorine gas in repeated attacks by regime forces in Syria. The OPWC said there had been a "spate of new allegations" of chlorine attacks. The regime agreed to destroy its chemical weapons a year ago following global outrage over a sarin gas attack in Ghouta, a suburb of Damascus, in August 2013 that killed hundreds – the worst attack of its kind for quarter of a century. However, opposition groups claim the regime has not handed over all of its chemical stockpile and still uses chemical weapons against its people. Although the U.S. and other Western countries had attempted to prevent the regime from using chemical weapons last year and even considered military intervention, ISIS has changed the balances in the war, seemingly removing the option of military intervention in Syria.