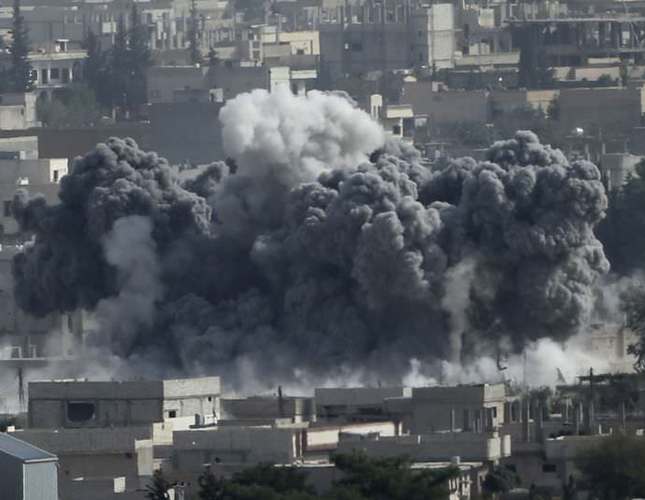 by Daily Sabah Oct 13, 2014 12:00 am
The ongoing tension in the Syrian border town of Kobani continues as six suicide car bombings, allegedly purportrated by Islamic State of Iraq and al-Sham (ISIS) militants, rocked the town on Monday. The clashes between Kurdish armed groups and ISIS militants are still ongoing. Despite intensified airstrikes, ISIS militants still continue to hold strategic positions on the outskirts of Kobani. Amid deep concern about the plight of Kobani, the U.S.-led coalition forces launched four airstrikes on ISIS targets near Kobani early on Monday, according to Anadolu Agency (AA). ISIS militants launched its offensive in the key Kurdish-populated Syrian town three weeks ago. Since then, the radical group has captured some of Kobani's surrounding villages. The heavy fighting for control of the strategic town continues unabated. With ISIS continuing to make significant gains, many claim that the Kurdish town is on the verge of collapse. The violence continues to rage with more than 550 people reportedly killed during heavy clashes between ISIS militants and Kurdish fighters, according to the Syrian Observatory for Human Rights. With the situation worsening in the Kurdish town, the coalition's airstrikes have lately grown more intense. The U.S.-led coalition conducted around 400 airstrikes in Iraq and Syria, U.S. State department spokeswoman Marie Harf said in a press briefing on Oct. 10.