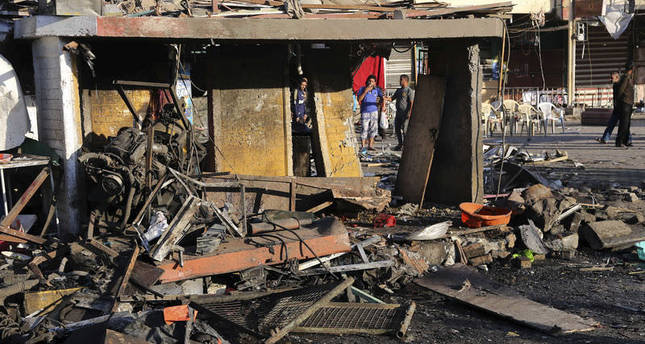 by Oct 13, 2014 12:00 am
Three bombings within an hour on Monday rocked Shiite neighbourhoods in the Iraqi capital as people filled the streets, distributing sweets for the Eid al-Ghadir Muslim feast, leaving at least 22 dead.

The attacks, at least two of which were carried out with suicide car bombs, occurred in or on the edge of the frequently targeted districts of Kadhimiyah and Sadr City, police said.

A suicide car bomb blew up against a security checkpoint on Aden square, at the entrance of the northwestern neighbourhood of Kadhimiyah, killing 11 and wounding 31, a senior Baghdad police officer told AFP.

And a bomb in the popular Mredi market in the sprawling northern neighbourhood of Sadr City killed five and wounded at least 24 people, the same source said.

In Habibiyah, on the southern edge of Sadr City, a suicide car bomb attack left at least six dead -- three policemen and three civilians -- in an area home to scores of car dealerships.

Sources at the interior ministry and in the capital's hospitals confirmed the casualty figures.

Following an all-too-familiar routine, the bombs hit when the streets of the Arab world's second largest capital were at their busiest, between 6:00 and 8:00 pm.

The United Nations said more than 1,110 people were killed in acts of violence across Iraq in September. According to an AFP count, more than 350 have already been killed this month.

While the bloodshed has been mainly on the frontlines where federal, Kurdish and allied forces are battling ISIS, blasts and executions in Baghdad continue to take a heavy toll.