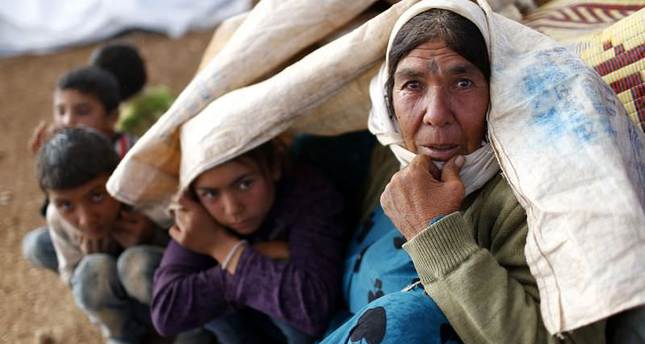 To get food and medicine to areas ruled by ISIS, the U.N. relies on partner humanitarian organisations such as the Syrian Arab Red Crescent and on tribal contacts. This has led to "huge gaps" in delivering aid and assessing needs, said Yacoub El Hillo, the U.N. coordinator in Syria.

El Hillo said in a telephone interview from Damascus that the U.N. has been absent from the ISIS-controlled eastern provinces of Raqqa and Deir al-Zor since 2013.

"We have not been able as U.N. agencies to go directly into these two locations," he said, citing dangers presented by the militants who have kidnapped aid workers and killed thousands in their advance across Syria and neighbouring Iraq.

El Hillo said 66 humanitarian workers have died during the Syrian civil war, which grew out of an uprising against President Bashar al-Assad in 2011 and now involves rebel groups fighting each other as well as government forces.

In contrast to the blackout in ISIS territory, El Hillo said the U.N. had persuaded the Assad government to let it into besieged areas and deliver medicine which Damascus had previously blocked, arguing that it would go to rebel fighters.

El Hillo described a U.N. Security Council resolution passed in July authorising aid deliveries across Syria's borders without permission from Damascus as a breakthrough. Since then, 20 convoys had gone over frontiers into areas controlled by opposition groups other than ISIS.

However, Raqqa and Deir al-Zor were another matter. "Is what we are able to do in these two locations sufficient and is it meeting the needs of civilians fully? Absolutely not," he said in the interview which was conducted on Friday.

"We really have huge gaps," El Hillo said. "The idea is not just to deliver items. The idea is to make sure that people's wellbeing is catered for; that there are no protection concerns, there are no violations ... Physical presence is vital."

Since the war began, the U.N. says Damascus has used sieges and deliberately blocked aid access from neighbouring countries or across front lines to opposition-held areas. Close to 200,000 people have died and nearly 10 million are displaced.

In July, the Security Council authorised aid access to opposition areas at four border crossings from Turkey, Iraq and Jordan, even though the Syrian government warned that it deemed such deliveries incursions into its territory.

El Hillo said he had not had any problems with the government during the 20 cross-border deliveries despite its initial anger.

"It's a breakthrough ... We notify the government 48 hours before any such delivery takes place," he said. "We have proved that we don't have any agenda except the humanitarian agenda."

Non-governmental organisations accused the U.N. in April of excluding them and withholding information vital to assisting millions in need.

However, coordination between the U.N. and other aid groups had increased since then following a meeting in neighbouring Lebanon. "There is a huge appetite for us to work together," said El Hillo. "We are trying to make it one system."

"For a very long time, we were not able to take specific medical items cross-line. These were trauma kits, surgical equipment," said El Hillo. "There was this notion that to take it across lines into areas controlled by the opposition would mean to help equip field hospitals that are treating fighters."

The U.N. says 4.7 million Syrians live in areas that are hard to reach, including at least 241,000 people who remain besieged by either government or opposition forces.

El Hillo said aid convoys are increasingly allowed to cross into some of these besieged areas including parts of Aleppo, Homs and the Damascus district of Muadamiya.

"It doesn't mean we really solved all the problems of besieged communities," he said, pointing to the opposition-controlled Damascus suburb of Douma which is surrounded by Assad's forces.

"Estimates put the number of people living there between 500 and 650,000 people ... That is an area we are not able to reach on a systematic basis, so the issues continue," he said. "This is because of the fact that, I think, Douma is one of the strongest held for the opposition."